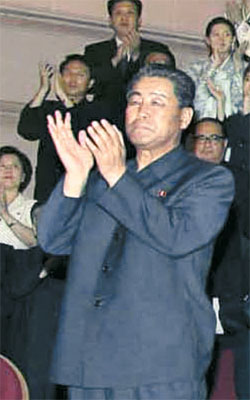 One of the overlooked ways to get ahead in the North Korean military is to show the strategic and tactical skills needed to direct a military parade.

Kim Jong-gak, 70, led a grand parade in October 2000 that marked the 55th anniversary of the North Korean Workers’ Party at Kim Il Sung Square in Pyongyang. At the time, he was vice minister of the People’s Armed Forces and a three-star colonel general.

Since then his star has only risen, and he’s now one of the powers behind North Korea’s new leader, Kim Jong-un. He is a four-star general, senior deputy director of the General Political Bureau of the Ministry of People’s Armed Forces, a key body in the communist country, and a member of the party’s Central Military Commission.

“The North Korean military trusted Kim quite a lot, who used to work at the 820 Mechanized corps in Sariwon [North Hwanghae],” Choe Ju Hwal, a defector-turned-researcher, told the JoongAng Ilbo.

Before 1994, Kim’s rival was Hong Gye-song, former vice chief of the general staff of the Korean People’s Army. According to sources, some North Korean officials said Hong was a candidate to be the next Army chief of staff, and Kim was in line to be the next minister of the People’s Armed Forces.

Hong had a clear advantage in his background. He was a son-in-law of Choe Hyon, a close confident of North Korean founder Kim Il Sung from the communist guerrilla war days against the Japanese.

“Whenever a national ceremony or a military event occurred, Kim and Hong submitted their reports in turn as representatives of the Ministry of the People’s Armed Forces,” defector Choe said.

“But Hong’s career subsided after Kim Jong-il took power, while Kim Jong-gak’s was on his track, and he was promoted to general and became a member of the Supreme People’s Assembly.”

South Korean and U.S. authorities have focused on Kim since he was made senior deputy director of the general political bureau in March 2007. He got the post after his predecessor, Jo Myong-rok, became ill.

A South Korean government official told the JoongAng Ilbo, “Kim Jong-il could have appointed Kim Jong-gak to the deputy director out of consideration for his son’s succession.”

The General Political Bureau wields significant power. The constitution of the Workers’ Party was revised in September 2010 when the country’s new successor to the throne, Kim Jong-un, made his first public appearance, to say, “The general political bureau plays a role holding the same authority with that of the party’s Central Committee.”

Kim Jong-gak was also listed on the funeral committee for Kim Jong-il, which is a map of the inner circle surrounding Kim Jong-un.

He was 24th on the 232-person list, followed by powerful military officials such as O Kuk-ryol, vice chairman of the National Defense Commission, Marshal Ri Eul-sol and O Il-jong, a senior military official of the Workers’ Party’s Central Committee.

Some say that Kim’s high place on the list may be a result of his tutoring Kim Jong-un in military affairs. Kim Yeon-su, a professor at state-run Korea National Defense University, said, “We were tipped off that Kim taught the heir apparent Jong-un about how to control the military through the party.”

Some sources say Kim could be rising as a powerful guardian for Kim Jong-un, along with other high-profile guardians such as Ri Yong-ho, chief of the general staff of the Army, and Kim Yong-chol, chief of the North Korean Army’s reconnaissance bureau, the spy agency against the South.

North Korea’s official media has reported that Kim was born in Jeungsan County, South Pyongan Province, in July 1941 and entered the People’s Army in August 1959.