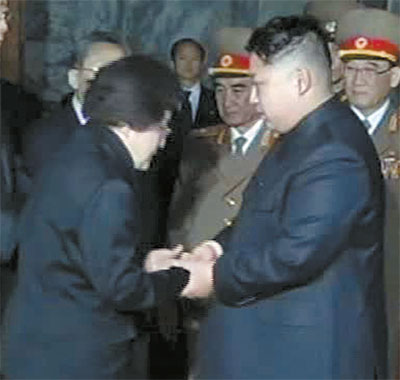 Lee Hee-ho, former first lady of the late President Kim Dae-jung, had a short talk with new North Korean leader Kim Jong-un during her mourning trip for the late Kim Jong-il, and the young successor expressed gratitude for her visit.

But there was no conversation between the new leader and Hyundai Group Chairwoman Hyun Jeong-eun, who also made a condolence visit for the late North Korean leader.

The two private mourning groups led by Lee and Hyun returned to South Korea yesterday after paying respects to the late North Korean ruler on Monday at the Kumsusan Memorial Palace in Pyongyang, where his body is displayed.

The two widows took the trip to reciprocate delegations from the North that attended their husbands’ funerals in Seoul.

“We didn’t have a separate, private meeting [with Kim Jong-un],” Yun Cheol-gu, secretary general of the Kim Dae-jung Peace Center, which Lee chairs, told reporters at a briefing yesterday. Yun said Lee had a face-to-face meeting with Kim Jong-un at the mausoleum “for 10 minutes” after “waiting for 40 or 50 minutes.”

“At the meeting, Mrs. Lee told Kim that she felt sorry for his father’s death, and Kim told her ‘Thank you for visiting us from a distant place,’?” Yun said.

Hyun, who returned to South Korean territory ahead of Lee, told reporters, “I just expressed my condolences and didn’t have any talk [with Kim Jong-un] separately.”

During the two-day, one-night trip, Yun said that Lee didn’t have any meals with North Korean officials.

However, Lee and Hyun met with Kim Yong-nam, the nominal head of state, yesterday morning. “We had a meeting with Kim Yong-nam at the Mansudae Assembly Hall this morning,” Yun said. “Lee and Kim expressed their gratitude for this condolence trip and North Korea’s sending a delegation when the late President Kim Dae-jung passed away.”

During the dialogue, Lee told Kim that she hopes the June 15th South-North Joint Declaration will continue and that her visit would help improve inter-Korean relations, Yun added.

Before they returned, they visited the Kaesong Industrial Complex yesterday.