In the week after Christmas, people try to come up with New Year’s resolutions. It makes them look back, try to keep the good and abandon the bad. But when it comes to this year’s Korean cultural scene, there isn’t much to abandon. K-pop wasn’t the only art form that extended Hallyu in the global community. Literary works, dramas and movies also found broader audiences, both locally and abroad. Looking at the past year’s successful cultural trends might help people who want to gear up for the cultural news to come. 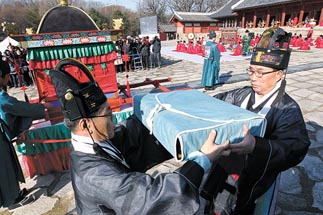 Ancient, Korean royal books that were taken overseas during foreign invasions made their way home this year.

Oegyujanggak Uigwe, books that describe protocols for royal ceremonies of the Joseon Dynasty (1392-1910), were taken to France in 1866 by the French Navy and had been kept at the National Library of France.

They were returned to Korea in May.

The return was a follow-up to an agreement between President Lee Myung-bak and French President Nicolas Sarkozy during the Group of 20 Summit in November 2010. The books are on a five-year lease agreement that can be renewed indefinitely.

Korea has officially sought the return of the 297 books since 1991. A Korean-born French scholar Park Byeng-sen, who contributed heavily to their return from France, died in November soon after her life-long dream had been accomplished.

Former Japanese Prime Minister Naoto Kan promised to return pieces that are part of Korea’s cultural heritage last year as a token of the government’s commitment to forging a better relationship with Korea. Last year marked the 100th anniversary of Japan’s annexation of Korea.