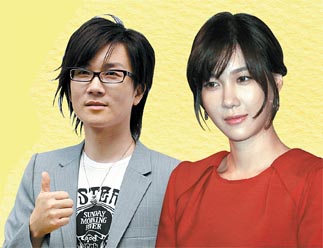 The most shocking entertainment news of 2011 was the discovery of rock star Seo Taiji’s secret marriage to actress E Jiah (“Athena: Goddess of War,” 2011) 14 years ago. The marriage became public after E filed a lawsuit for alimony and division of property in January.

Seo’s fans felt betrayed as the 39-year-old has flatly denied speculation that he was married and joked that he’s “married to music.”

E demanded 5 billion won ($4.33 million) for division of property and 500 million won in alimony from Seo after they failed to reach a divorce settlement.

According to E’s legal representative, the whole process caused E and the people around her so much pain after it became public that she dropped the suit. The two negotiated a settlement in July.

Before the marriage topped the entertainment headlines, E was spotted with actor Jung Woo-sung in Paris in March. The two admitted to being lovers at the time.