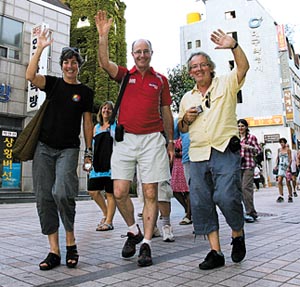 On the back of a K-pop boom and resurging Korean Wave in Southeast Asia, the Korea Tourism Organization announced early this year that it plans to attract 10 million foreign tourists in 2011.

To boost figures, the KTO allocated around 3 billion won ($2.6 million) for short-term marketing in the fourth quarter. The highlight was “Hallyu Week” in November, when tourists visited destinations with Hallyu stars. During the first week of December, the KTO celebrated the arrival of 9 million foreign tourists to Korea for the first time ever.

“We expect the tally for foreign tourist this year to be around 9.8 million, slightly less than our goal, but nevertheless, a big achievement,” said Kim Jong-hoon, an official at the KTO.