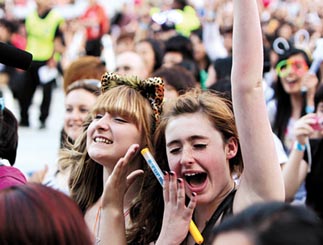 Koreans used to be the ones crazy about entertainers from overseas. High school girls tried to break into the sold-out 1969 Richard Cliff concert. When New Kids on the Block came in 1992, Korean fans stampeded, injuring 70 and killing one. The tables have turned. Overseas fans now rave about Korean singers and their music. For instance, French fans rallied outside a sold-out SM Entertainment concert featuring Girl’s Generation and Super Junior in June.

Taeyang’s newest album became the top seller on iTunes one day after being uploaded, and Korean music and choreography are plagiarized by some Southeast Asian singers.

Experts say the lengthy training at Korean entertainment companies plays a decisive role. It took eight years for Jo Kwon, a member of 2AM, to debut as a singer.