2011 was year of falling wages and rising prices

2011 was year of falling wages and rising prices 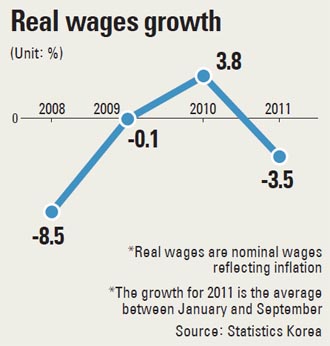 Economic trends for the average household this year were the worst since the late-1990s economic crisis and the 2008 global financial crisis.

Inflation rose sharply while incomes grew at a slower rate than last year.

According to figures from the Bank of Korea, Statistics Korea and the Ministry of Employment and Labor yesterday, the country’s inflation-adjusted average wage dropped this year.

From January to September, the average take-home wage for a worker in Korea was 2.72 million won ($2,352), down 3.49 percent from a year earlier. Take-home wages, or real wages, are calculated by factoring the consumer price index into the value of nominal wages.

Lee Seong-moo, a 30-year-old company worker, said his monthly spending has grown significantly over the past year.

“Last month, I spent a whopping 1.2 million won on food alone,” he said. “Last year a normal lunch cost me around 5,000 won and now it’s doubled.” Lee doesn’t know if he’s going to be able to save money to purchase or even rent a house when he eventually gets married.

Consumer prices soared this year, with inflation remaining above the government’s target of 4 percent.

Prices of groceries and utility fees rose, affecting every household.

“Inflation was high but real wages declined,” said Lee Geun-tae, a researcher at the LG Economic Research Institute. “The number of retired, independent businessmen aged above 50 increased significantly, which means that families are having difficulty in managing their household budgets.”

Prospects for next year are even bleaker as economic growth is expected to slow.

The central bank earlier predicted that Korea’s economy would grow 3.7 percent next year, a slight drop from 3.8 percent projected for this year.