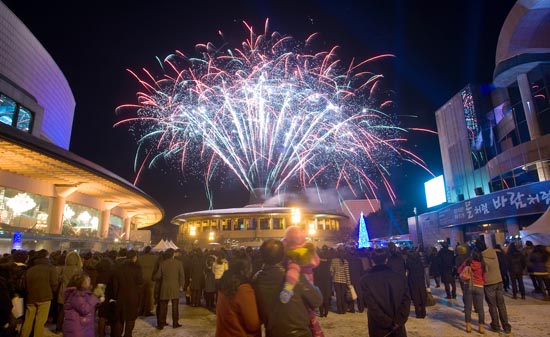 The Seoul Arts Center will host a New Year’s Eve concert on Dec. 31 at its Concert Hall. When the performance is over, a countdown event with fireworks and wish balloons will take place at the outdoor plaza. See HOLIDAY EVENTS. Provided by the Seoul Arts Center

Metheny, the winner of 18 Grammy Awards, is one of the most critically acclaimed jazz musicians of the ’70s and ’80s and came to prominence as the leader of the Pat Metheny Group.

Today: “Annie,” the recipient of the award for best musical at the Korean Musical Awards in 2007, is back in theaters.

First introduced to Korea in 2006, “Annie” delivers its warm message again this winter through the story of the feisty young orphan who wins the heart of a billionaire industrialist.

The original Broadway production garnered seven Tony Awards, including best musical, after it opened in 1977.

The show has music by the Gipsy Kings and John Cameron and boasts a combination of acrobatics, dancing and dueling.

It is based on “Zorro,” the 2005 mock biography of the masked swordsman by Isabel Allende, and opened in London in 2008.

To Saturday: Universal Ballet company brings its version of the traditional holiday production to theaters this month.

Along with “Swan Lake” and “The Sleeping Beauty,” “The Nutcracker” is one of the three great ballets composed by Peter Tchaikovsky. UBC has presented “The Nutcracker” every year since 1986. Its version is adapted from the one choreographed by Vasily Vainonen in 1934.

Satuday: Asian-American electro hip-hop group Far East Movement is putting together this hip-hop and electronic music festival to celebrate the New Year. Six artists will perform at Vista Hall, the other four at the Walkerhill Theater.

Jan. 12: Young and noted two musicians, violinist Shin Hyun-su and pianist Kim Tae-hyung will be performing Beethoven Violin Sonata No. 5 in F major “Spring”, Brahms Scherozo in C minor and many others. Having debuted at Kumho Asiana Cultural Foundation’s Prodigy Concert series, both have won awards at prestigious international competitions.