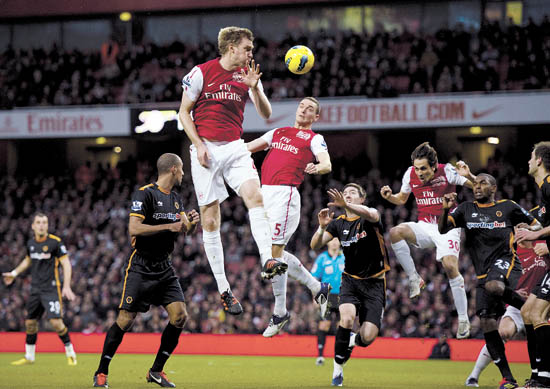 Arsenal’s German player Per Mertesacker jumps for a header against Wolverhampton Wanderers during the English Premier League football match at the Emirates Stadium in London on Tuesday. The match ended in a 1-1 draw. [AFP/YONHAP]


LONDON — Tottenham established itself as the likeliest challenger to the dominance of the Manchester clubs in the Premier League this season, beating Norwich 2-0 on Tuesday to tighten its grip on third place.

A classy second-half double by winger Gareth Bale lifted Spurs to within seven points of City and United, with the London club still holding a game in hand — at home to Everton next month.

With fifth-place Arsenal drawing 1-1 at home to Wolverhampton Wanderers to join fading title hopefuls Chelsea and Liverpool in dropping points in the latest round of league fixtures, it looks increasingly like a threehorse race for the title.

However, Bale and Spurs aren’t getting ahead of themselves.

“We said at the start of the season that our main objective was to get back in the Champions League and that’s still the case,’’ said the 22-year-old Bale. “We are just going to take it one game at a time.’’

Heading into the game at Carrow Road, Tottenham knew Manchester United — which is level on points with City — was the only team in the top six to have won in the latest round of fixtures.

The pressure was on Harry Redknapp’s team to take advantage and it did just that, with Bale capping an impressive individual display by scoring goals in the 55th and 67th minutes.

His first was a sidefooted finish from close range, while his second demonstrated his pace and power, bursting through the middle before supplying a deft finish over Norwich goalkeeper John Ruddy.

Bale could have had more goals. Out of Spurs’ 15 shots, he had seven.

“He’s an amazing player isn’t he?’’ Redknapp said of Bale, who emerged as a potential superstar in a breakthrough 2010-11 season in which he wowed football fans worldwide with his performances in the Champions League.

“When he picks the ball up, turns and runs at you, he is unplayable.’’

Arsenal has never finished behind fierce north London rival Tottenham since the Premier League’s inception in 1992 but this could be the season.

Arsène Wenger’s team missed a great chance to climb above Chelsea into fourth place by only drawing against Wolves, who played the last 17 minutes with 10 men following the harsh straight red card handed to Serbia midfielder Nenad Milijas for a studs-first tackle.

Ivory Coast forward Gervinho opened the scoring for Arsenal in the eighth minute but the hosts failed to make the most of a series of chances, the majority of which fell to leading scorer Robin van Persie, and Wolves equalized through Steven Fletcher in the 38th.

Visiting goalkeeper Wayne Hennessey foiled the Gunners time and again in the second half, leaving them fifth in the table.

“It was the kind of game that if you played 20 times, you win 19 of them. Unfortunately this was the one time we didn’t win,’’ Wenger said. “Their keeper played the game of his life.’’

Jamie Mackie scored QPR’s equalizer at the Liberty Stadium when he got in behind Swansea’s notoriously stubborn defense to stab home a finish in the 58th minute, canceling out Danny Graham’s goal for Swansea in the 14th minute.