Fierce competition is brewing in the “coffee mix” industry as consumers’ tastes evolve rapidly in this era of franchise chains like Coffee Bean & Tea Leaf that offer ever more exotic concoctions.

Once satisfied with their slim pouches of ground instant coffee with cream and sugar, increasingly savvy local drinkers are demanding more refined and exquisite flavors, a trend that is causing ripples in the industry.

Early last year, Lotte Chilsung got the ball rolling by introducing its Cantata coffee mix in a bid to attract young coffeeholics.

And the market got hotter when Namyang Dairy Products rolled out its French Cafe brand of lattes to threaten the dominance of Dongsuh Food’s Maxim coffee mix. 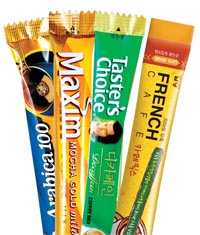 Dongsuh, the nation’s favorite instant coffee maker, countered in October of this year by unveiling Kanu, which claims to offer the same taste as brewed coffee, while Nestle threw its hat in the ring last month with My Cup - eschewing tacky plastic cups for the more sophisticated kind dished out at Starbucks.

Korea’s coffee market is huge, with 34 million adults drinking an average of 1.83 cups a day, according to a recent study by Dongsuh Food. The market has more than doubled in value in four years, from 1.56 trillion won ($1.35 billion) in 2007 to 3.69 trillion won this year, it added.

According to the Korea International Trade Association, Korea imported $508 million of ground coffee and coffee beans in the first 10 months of the year, already far surpassing last year’s total of $307 million.

Coffee shops are also growing in popularity, with total sales ballooning from 430 billion won in 2007 to 1.38 trillion won.

With brewed coffees encroaching on their target customers, instant coffee makers have begun seeking more creative ways of keeping their grip on the market.

“To differentiate our products, our researchers focused on improving the quality of the creamer by adding fat-free milk to replace sodium caseinate, an artificial chemical widely used by coffee-mix makers,” said Kim Hong-tei, a spokesman for Namyang, adding that the company invested heavily in this area.

“The domestic coffee mix market has been a two-horse race [between Dongsuh and Nestle] for a long time,” Kim said. “Naturally, the two companies saw little need to change their ingredients as customers had few other options. But our surveys showed that many people wanted a new creamer, so we figured we could tap that niche market.”

The competition among instant coffee makers is also changing the landscape of the industry.

Dongsuh’s dominance in this segment has lasted for more than three decades, ever since it released its first three-in-one coffee in a pack in 1980. In fact, its Maxim brand became such an instant hit that Nestle followed suit in 1987 by releasing Taster’s Choice.

But the pioneer is now being threatened by the release of new products from rivals.

But the market leader saw its huge lead eaten into mid-year, falling to 77.1 percent in June, just six months after new market player Namyang Dairy jumped into the fray.

And market observers say the competition is likely to come to a boil next year.

“Namyang managed to square itself away in the market nicely this year to emerge as the runner-up in the market, but the battle between the top two will just get fiercer in 2012,” said one official at a local discount chain.

But even though more people are making the switch to brewed coffee over instant, the convenience and affordability of the latter - as well as Korea’s collective sweet tooth - have kept it as the nation’s most-lucrative market.