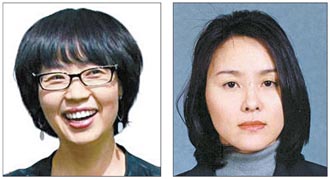 Local conglomerates - traditionally conservative and male-oriented - are taking more notice of the fairer sex, with more female executives being moved up the ranks during recent end-of-year promotions.

On Tuesday, Hyundai Motor Group, the country’s second-largest conglomerate by asset, promoted two female employees each from Hyundai Card, the group’s credit card arm, and Innocean Worldwide, its advertising arm, as part of its record promotion of 465 executives.

According to the group, 48-year-old Kim Hye-kyoung was upgraded from executive director to executive vice president at Innocean Worldwide, becoming the first female executive to hold the title. Hyundai Card’s Lee Mee-young, 39, was also promoted to the position of director.

“We now have five female executives in our group [including the two mentioned],” said an official there. “We expect the number will grow in the coming years.”

The move comes as Samsung Electronics Chairman Lee Kun-hee has been emphasizing the need to support leaders with their fingers on the pulse and their eyes on the future of technological advancements, regardless of their gender, age or education.

But while big business is taking more notice of female employees, women still only account for a small share of the senior positions at Korean conglomerates.

For example, the nine female executives who were promoted at Samsung Group represent less than 2 percent of the 501 executives promoted this year.

Also, according to the Korean Women’s Development Institute, female executives only fill 4.7 percent of all executive positions at the nation’s top companies. Still, this is a significant step up from the situation three years ago, when they made up a mere 1.5 percent.

According to industry sources, corporate Korea has yet to welcome its first female chief executive at any of the subsidiaries of the country’s top 10 conglomerates.

This puts Korea a few steps behind other developed economies in terms of rising equality at the workplace. In October, U.S.-based IBM appointed Virginia Rometty as its CEO, making her the first woman to head the company. And in September, Hewlett-Packard named eBay veteran Meg Whitman as its new CEO.

“We live in an era of prudent consumption, and female employees tend to be more sensitive about this than male workers,” said one industry official.