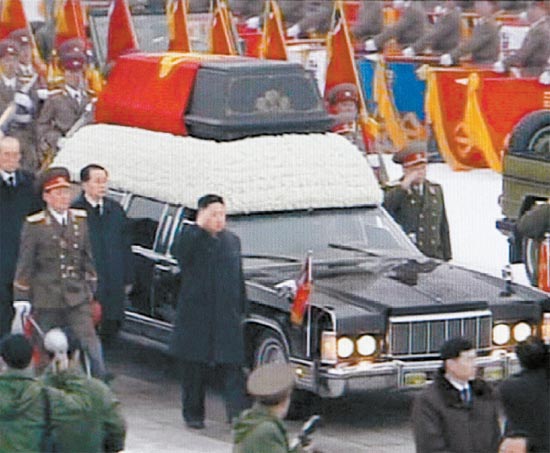 Kim Jong-un, fourth from left, accompanies the hearse carrying the coffin of his father, the late North Korean leader Kim Jong-il, during the funeral procession in Pyongyang in this image taken from AP Television News yesterday. [AP/YONHAP]


The North Korean state media yesterday cited the nuclear program as Kim Jong-il’s most important legacy as it paid tribute to the late leader during his funeral, indicating that it does not intend to give up its nuclear weapons.

“North Korea has been dignified as a country that manufactured and launched artificial satellites and accessed nukes,” the Rodong Sinmun, the ruling Workers’ Party paper, said in an essay carried by the Korean Central News Agency yesterday.

Before Kim’s sudden death from a heart attack on Dec. 17, the North was moving closer to the resumption of six-party talks on shutting its nuclear weapons program, taking steps to assure Seoul and Washington that it was serious about suspending the program for aid.

Many analysts have said the North will not end its nuclear program, which gives the isolated regime a deterrent against external pressures and can lead to economic aid.

The North’s media said that Kim Jong-il’s son Kim Jong-un would enrich the revolutionary legacy of his father, a hint that the new leadership will continue the nuclear programs.

The state funeral for Kim Jong-il yesterday was watched closely for any hints about how the transition of power is going. Kim Jong-un led a solemn and pompous state funeral service, a signal that he has stepped fully into his father’s shoes.

A limousine carrying a huge picture of a smiling Kim Jong-il led the funeral cortege in snowy Pyongyang streets before the Kumsusan Memorial Palace, and Kim Jong-un walked beside another slow-moving limousine that carried the coffin containing the remains of Kim Jong-il on its roof. State television showed him with a saddened expression and a hand sometimes raised in salute.

That was different from the 1994 state funeral for North Korean founder Kim Il Sung, when his eldest son Kim Jong-il was absent from the funeral motorcade.

The power elite known to be pro-Kim Jong-un, including his uncle Jang Song-thaek, and Ri Yong-ho, the chief of the general staff of the North’s army, also accompanied the hearse.

“The process of power transition in the North has been well advanced so far and this funeral service, seemingly well pre-choreographed and pre-arranged, highlights that Kim Jong-un has secured a significant power base,” said Choi Kang, an expert on North Korea at the Institute of Foreign Affairs and National Security.

The state media has upgraded Kim Jong-un’s titles. After calling him the “great successor,” they started calling him “outstanding leader,” “supreme leader of the military,” “sagacious leader” and “sun of the 21st century.”

Yoo Ho-yeol, a Korea University professor in North Korean studies, said the highlighted presence of Kim Jong-un at the funeral yesterday might actually show insecurity in his position.

“Kim Jong-il was absent from his father’s funeral because he was sick at the time,” he said. “But even if he had been healthy, he did not need that kind of thing, as he had already been securing power.”