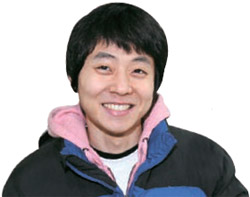 In a statement, the Kremlin said President Dmitry Medvedev signed off on a special decree granting the 25-year-old Korean native Russian citizenship. According to Aleksei Kravtsov, president of the Russian Skating Union, Ahn will receive his Russian passport soon after New Year’s Day.

The shift will open the door for Ahn to represent Russia at upcoming international events, including the 2014 Winter Olympics in the Russian resort town of Sochi.

Beginning training here in June and applying for a Russian passport in August, Ahn said he was finally ready to get the administrative work out of the way.

“I wanted to compete for Russia and I couldn’t do it without Russian citizenship,” Ahn told Yonhap News Agency by phone. “And I wasn’t allowed to retain dual citizenship. I can get my Korean citizenship back once I return home. For now, I want to stay focused on competing here.”

The Olympic champion said he has chosen “Viktor” to be his Russian name. He said it’s a common Russian name that also resembles the English word “victory” and added he wanted to become as famous as a late half-Korean rock musician, Viktor Tsoi.

Ahn is among the world’s most decorated short-trackers. At the 2006 Torino Winter Games in Italy, he won three gold medals and one bronze. He also captured five straight world titles from 2003 to 2007.

In 2008, he suffered a career-threatening knee injury after crashing into a wall during a practice, and underwent four operations in 15 months. He later missed qualifying for the national team for the 2010 Vancouver Winter Olympics.

Ahn’s father, Ki-won, has alleged that Hyun-soo was a victim of factional feud within Korean short-track. Ahn said he will discuss his future schedule with Kravtsov. In January, the European short track championships will take place in Czech Republic.

“I am in decent shape but I haven’t really trained much while going through injury rehabilitation,” he said. “I don’t want to force the issue. I will keep training and see if I can enter the Czech event.”

He said his long-term goal is to represent Russia at the 2014 Winter Olympics in Sochi and win a medal.

Ahn is expected to make his Russia international debut at the ISU Short Track Speed Skating European Championships in Mlada Boleslav in the Czech Republic next month.

Though a traditional winter sports power, Russia has yet to win an Olympic short-track gold medal. Korea leads the all-time short-track medal tally with 19 gold medals and 37 overall.