Trying to train his way off the bench

Trying to train his way off the bench 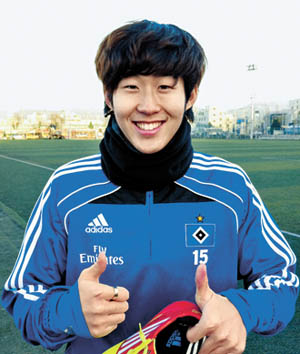 For Hamburg SV striker Son Heung-min, football training is all he does even on vacation.

As the first half of the German Bundesliga season has ended, Son came to Korea last week, but right after he landed the 19-year-old headed to his hometown of Chuncheon, Gangwon, for practice.

In fact, even 12 hours of travel time from Germany wasn’t a big deal to him. He arrived in Korea at 1 p.m. on Dec. 23, but began his training just three hours later.

“I’m not a superstar,” Son said to Ilgan Sports, the JoongAng Ilbo’s daily sports newspaper. “In order to be fit, I always need to train.”

Son has already shown he is a “training addict.” During his 39 days of offseason this summer, he trained every day with his father Son Woong-jung, who is the youth team coach for Chuncheon FC.

During that time, the Korean footballer lifted weights, conducted ball-handling drills, and also took 1,000 practice shots a day for nine hours each a day. By the beginning of this season, it started to pay off.

In the preseason, Son fired 18 goals in 10 matches and in the first seven matches of the Bundesliga, he netted three goals. However, for more than two months, his scoring tally was nil.

Once new coach Thorsten Fink took over the team in October, it was common to see Son on the bench.

“I wasn’t performing well and, honestly, I couldn’t figure out the style of my coach.” Son said. “If I show good form during training, I can get more chances in the second half of the season.

“That is the reason why I can’t stop training during this break time.”

For Son, the holidays just mean more training. The striker did admit, however, that he went out with friends to watch movies and eat pizza on the evening of Christmas Day.

During his stay in Korea, Son is much busier than he is in Germany. Each day, he wakes up at 8 a.m. to begin muscle training and then gets a massage and chiropractic work on his spine for about an hour. In the afternoon, he takes acupuncture to ease his muscles before starting his dribble and shooting practice for three hours.

“I’m getting a lot of treatment to prevent injuries in the second half of the season,” Son said. “I think it will eventually help me in the future.”

On Wednesday, Son took a little break from his practice to do a photo shoot for an online football game.

“I didn’t miss my morning training though,” he said.

Son will go back to Germany on Sunday. His club Hamburg is currently in 13th place and is looking to bounce back with Fink and new sporting director Frank Arnesen, who is bringing young players to the roster. But Son said the club situation isn’t a big problem for him.

“It doesn’t matter that new players are coming to our team because I get along well with every player,” Son said. “My condition and performance are the key. I will perform better in our upcoming practice games and try to become a regular member.”

Hamburg will begin training camp in Spain beginning next Wednesday. The team’s second half of the season starts on Jan. 22 against defending champion Borussia Dortmund.