‘A Reason to Live’: A dark, rigid drama that fails to take flight

‘A Reason to Live’: A dark, rigid drama that fails to take flight 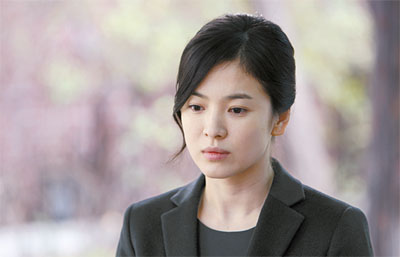 Song Hye-kyo as Da-hye in “A Reason to Live.” Provided by Lotte Entertainment

The third feature film by Lee Jeong-hyang, “A Reason to Live,” takes on a darker tone from the same director that helmed the popular rom-com “Art Museum by the Zoo” (1998) more than a decade ago.

Da-hye (Song Hye-kyo), a TV producer, loses her fiance, Sang-ho, on her birthday, when he is hit by a motorbike. When the driver of the motorbike sees him knocked down, he brutally runs him over a second time and makes sure he is dead.

A year later as Da-hye is at Sang-ho’s memorial service, her sister asks her why she signed a petition to revoke the death penalty for the murderer. Da-hye says she wanted to forgive the murderer and give him a chance to turn his life around.

By this time, a subplot emerges involving Ji-min (Nam Ji-hyun), the sister of Da-hye’s friend Ji-suk. The teenage girl relies on Da-hye as a comforting, older sister type and frequently stays over at her house.

While Da-hye tries to find solace from the tragedy in forgiving and showing mercy, Ji-min serves almost as Da-hye’s id, relentlessly challenging the motives behind her decision to forgive the juvenile that killed her fiance.

However, when Da-hye finds out that the teenage boy who killed her fiance brutally killed his classmate after getting out of juvenile detention, her convictions are shaken to the core.

As such, the director refuses to give Da-hye a quick and easy road to mental peace or redemption. Instead, Lee throws the lost soul a spiritual slap in the face and forces her to confront the uncomfortable truth.

As a result, Da-hye has to deal with the fact that her self-righteous form of forgiveness wasn’t forgiveness at all, but rather a cover-up of her own guilt and fear.

Through the film, Lee Jeong-hyang digs deep into one theme in trying to portray the various implications surrounding the concept of forgiveness.

There are those times in some films when it seems as though the director has lost control of the central narrative.

In “A Reason to Live,” the opposite has happened. Lee’s direction feels overly controlling, as if the audience is being force-fed an ideological point that she wants to make. Lee’s voice is clear and logical throughout, but the film ultimately feels stiff, never hitting on a natural ebb and flow.

In fact, watching the film felt a bit like eating steak that hadn’t had time to rest after grilling, still needing to loosen up a bit and breathe.

With rigid lines like, “Today is the tomorrow that a dead man dreams of,” the actors, it seems, were more often left with a theatrical monologue rather than a movie script.

With similar themes of absolution, grief and redemption, Lee Chang-dong’s “Secret Sunshine” (2007) managed to achieve a clear yet lyrical film with the fierce intensity of the lead actress, Jeon Do-yeon. With a monotone, prosaic performance by Song Hye-kyo and a suffocating grip on narrative and format, Lee Jeong-hyang’s story this time around seems more suited for a prose experience instead of a cinematic one.

“A Reason to Live”