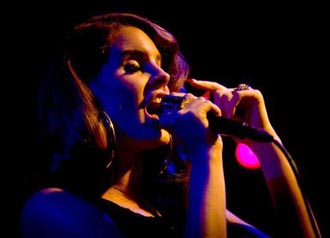 Honeyed vocals, a cinematic pout and a haunting, David Lynch-inspired video clip posted on YouTube was all it took to propel Lana Del Rey to global stardom, hailed as the musical revelation of 2011.

But a just-as-swift backlash has threatened to bring down the New York singer before her first album even hits the shelves next month, after bloggers attacked the 25-year-old as an industry-backed “fake,” posing as self-made artist.

A collage of vintage footage, cartoons and contemporary images, the clip evokes the gauzy, nostalgia-tinted worlds of filmmakers like Lynch or Sofia Coppola.

A second clip, “Blue Jeans,” was posted a few weeks later as Lana Del Rey wowed music critics worldwide, hailed as much as a musical revelation as a style icon, with spots in Vogue and Rolling Stone.

The singer’s world is an artful blend of modernity - hip hop tinged lyrics, jewelry and bling false nails - and retro-tinged Hollywood glamour, in the spirit of the cult TV series “Mad Men.”

“Somewhere between Hollywood icon and postmodern ‘It’ girl, she is perfectly in tune with the Zeitgeist,” wrote the French rock magazine Les Inrockuptibles.

“The gangsta Nancy Sinatra,” is how she has summed up her persona, leaving critics struggling to find a neater turn of phrase.

But her stellar rise soon enough gave way to a backlash, after some digging by indie bloggers unearthed a past life as plain old Elizabeth Grant, the author of two earlier, unsuccessful albums.

“She was basically a failed mainstream artist who is being ‘rebranded’ behind major label dollars,” read a scathing piece on the Hipster Runoff blog in September, claiming to “expose” the singer’s past.

As much as her background story as DIY artist, who may or may not once have lived in a trailer park, the controversy has zeroed in on the authenticity of her generous lips: a fake in both looks and substance, runs the argument.

Widely echoed in the music press, the backlash, wrote the Globe and Mail, “is threatening to bring down the ‘It’ girl before she has even has time to ‘break.’”

The Del Rey controversy has also left music critics red-faced, since many pride themselves on their flair for original new talent.

“People wailing about the ‘inauthenticity’ of Lana Del Rey,” wrote Alexis Petridis in The Guardian, “would presumably, have recoiled from David Bowie in the 1970s, horrified that he wasn’t actually a gay Nazi demagogue from outer space.”

But another critic in the paper pointed out that “it matters a great deal whose idea ‘Lana Del Rey’ was,” considering the languid, submissive feminine type she embodies through her looks and lyrics alike.