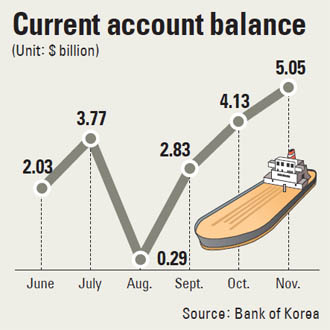 Economic indicators are down as fears of another global recession and the impact this could have on exports, continue to plague the country, which is struggling to reel in high inflationary pressure.

But according to the Bank of Korea yesterday, the current account balance last month showed the largest surplus in 13 months on the back of brisk exports of automobiles and petroleum products.

However, it also showed that imports on durable goods have fallen sharply as demand in the local market has shrunk.

Moreover, a Statistics Korea report that was released on the same day showed that manufacturers’ production has also fallen.

“Exports of automobiles and petrochemical products saw exceptional growth as the improved quality and price competitiveness of these products were not so affected by external conditions,” said Yang Jae-ryong, the BOK’s monetary and financial statistics director. “But imports fell for the third consecutive month [and] growth in durable goods dropped as a result of frozen expenditures.”

Exports climbed from $46.5 billion in October to $47.1 billion last month, while imports retreated from $42.9 billion to $42.6 billion over the same period.

The central bank expects this year’s current account surplus will easily pass its initial target of $27.2 billion as the figure hit $24.2 billion in the first 11 months and exports are showing “solid growth” in December, Yang said.

However, other indicators show slower growth this month.

When eliminating the seasonal boost at this time of year, exports are calculated to have slipped 1.3 percent to $45.2 billion from the previous month, while imports receded 6.2 percent to $40.6 billion. This would mark three straight months of decline for both, again with the seasonal factor removed.

Statistics Korea announced that industrial production has edged down 0.4 percent from November, following on from another drop that month. In October, it fell 0.6 percent on-month.

Production in the service industry was down 0.5 percent on-month, and retail sales shrank 0.6 percent.

“As risks associated with North Korea formed from the death of Kim Jong-il and added to existing concerns surrounding the euro zone debt crisis, uncertainty regarding the future direction of the economy became more pronounced,” said an official at the Ministry of Finance and Strategy.

The government earlier this month lowered its economic outlook for this year and next as a worldwide recession has shape up, presenting a significant threat to Korea’s export-dependent economy.

As a result, policy makers such as Finance Minister Bahk Jae-wan and BOK Governor Kim Choong-soo have started to shift their attention to the domestic market.

Yet the Korean market has shown few signs of revival as consumers continue to tighten the purse strings under pressure of high inflation and worsening living conditions, while income levels remain steady.

“The Korean economy is showing no signs of a sharp decline yet,” said Lee Yeon-shin, an analyst at Kyobo Securities.

“Nonetheless, the burdens linked to a slowing economy are likely to rise as companies will face accumulating inventories, local consumption will be curtailed by rising household debt, doubts about a recovery in consumption in the U.S. will linger on, and Europe and China will likely see their economies retreat.”

Others, such as Yang of the BOK, say it is too early to conclude that the economy is entering a recession as both export and imports show strong growth on-year. Exports were up 12.7 percent last month from 2010 while imports grew 11.1 percent on-year.

Additionally, investment in factories and production lines grew 7.7 percent in November from the previous year, marking a turnaround from a 12.1 percent drop in October.

Meanwhile, the central bank said an unexpected shortage in the domestic supply of goods, such as vegetables and oil, had caused inflationary pressure to spike, adding that consumers’ expectation of inflation - which has an impact on real inflation - is tough to rein in after it has risen.

Although inflation seems to have settled at 4 percent, skeptics say this was only achieved by revising the list of goods calculated.

The government adjusted the Consumer Price Index in the second half of the year, notably removing gold rings and adding telecommunication prices among scores of changes.