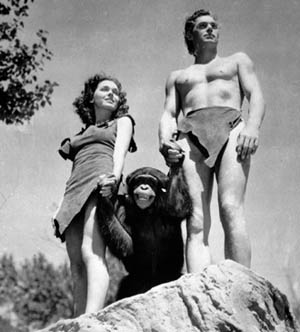 LOS ANGELES - Cheetah the Chimp, co-star of the 1930s “Tarzan” films with Johnny Weissmuller and one of the world’s oldest chimpanzees, has died in Florida. He was thought to be about 80 years old.

The Suncoast Primate Sanctuary Foundation in Florida, where Cheetah spent his retirement days, said the chimp died on Dec. 24 from kidney failure.

“It is with great sadness that the community has lost a dear friend and family member on Dec. 24, 2011. Cheetah, star of the Tarzan films, passed away after kidney failure,” the Sanctuary said on its Web site.

Cheetah was a character devised for the “Tarzan” films as a sidekick to the jungle hero, providing comic relief.

The role was played by Cheetah and several other primates over the years.

Actress Mia Farrow, whose mother Maureen O’Sullivan played Jane to Weissmuller’s Tarzan, posted a tweet on hearing of Cheetah’s death, saying; “My mom, Tarzan’s Jane, referred to Cheetah-the-chimp as ‘that bastard’ - saying he bit her at every opportunity. Cheetah lived to be 80.”

The average chimpanzee is thought to live for 40 to 45 years in the wild and about 10 years longer in captivity.