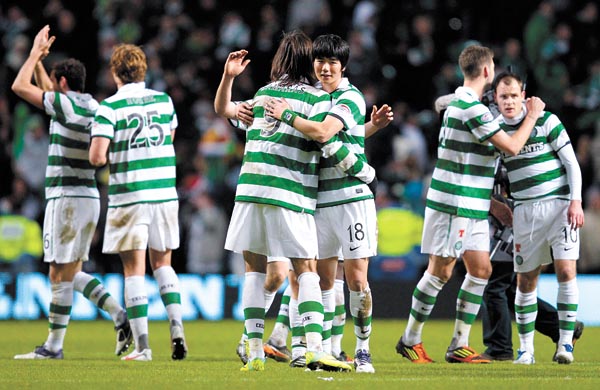 
GLASGOW, Scotland - Celtic supplanted Rangers FC at the top of the Scottish Premier League on Wednesday, defeating its Glasgow rival 1-0 to complete a dramatic turnaround in fortunes in the battle for the title.

Wales midfielder Joe Ledley grabbed the winner at Celtic Park, meeting a corner with an emphatic header at the far post in the 52nd minute to secure Celtic’s ninth straight league victory.

Less than two months ago, Neil Lennon’s side was in third place in the standings and 15 points adrift of Rangers, who at that stage were unbeaten and looking unstoppable in their bid to retain the title.

However, Celtic now has not only a two-point lead but also precious momentum as well following a deserved victory in the eighth match between the fierce rivals in 2011.

“It’s a great feeling,’’ Ledley said. “I thought we played well from the off and dominated the game.

“We didn’t have the best start to the season but we have moved on from there. We have played some great football at times, as we did today.’’

Trouble flared in the last meeting between the teams at Celtic Park in March, when three players were sent off, the two managers had to be separated after a heated post-match confrontation, 34 fans were arrested inside the stadium and a referee was manhandled.

Politicians and police united in condemning the violence, on and off the pitch, which continued the long-running feud between the neighboring teams and dominant forces in Scottish, who have won their domestic title 96 times between them.

Sectarian tensions have fueled the rivalry. Fans of Rangers are mostly Protestant, while those of Celtic are predominantly Catholic.

Wednesday’s game appeared to pass without major problems, with the game largely played in a fair spirit until the latter stages, when Rangers striker David Healy was lucky to avoid a red card for a rash challenge on James Forrest.

Outplayed for the most part in windy conditions, Rangers - who have now lost three of their last six league matches - came closest to scoring in the seventh minute, when Lee Wallace’s header was clawed away by Celtic goalkeeper Fraser Forster. Video replays were inconclusive over whether the ball crossed the line.

In the 24th minute, United States defender Carlos Bocanegra also missed a good chance for Rangers from a couple of yards out but they can have few complaints about the result.

“On another day, we would have got that goal and it’s a different game,’’ Rangers manager Ally McCoist said.

“In games like, that it takes one chance to win it and unfortunately it didn’t go our way.’’