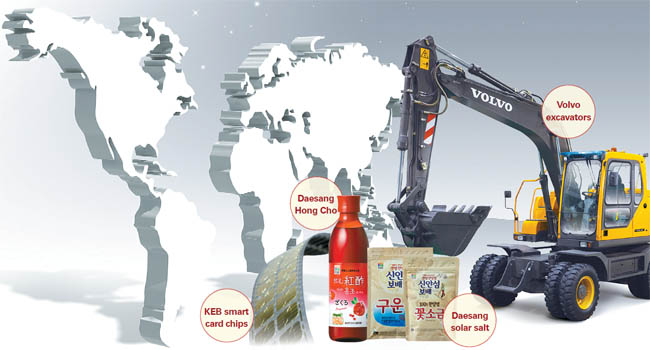 Many people know Korea is the world’s biggest manufacturer of memory chips, liquid-crystal displays and ships, but few outside the industry are aware it is also one of the top producers of excavators.

One of the major contributors to this booming industry for the heavy construction equipment is Volvo Group Korea, which derives 80 percent of its total sales from exports to rank as a top-five player in the global digger market.

The company now stands at the forefront of Volvo’s global excavator business, with the factory in Changwon, South Gyeongsang, serving as the world’s largest plant for the product.

“The export-driven policy, the reputation of Volvo’s brand and technology, and the sales network of Samsung and Volvo helped achieve the rare feat,” the company said in a statement. 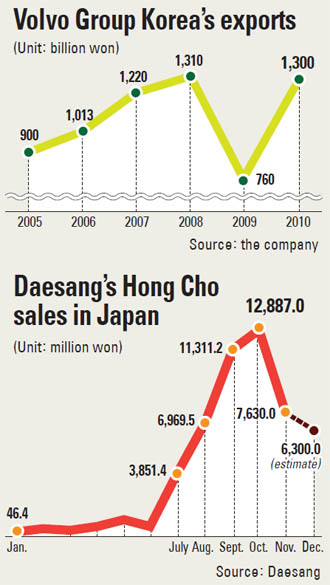 Its success was recognized recently by Minister of Knowledge Economy Hong Suk-woo, who presented it with an award in recognition of having maintained its status as a manufacturer of world-class products for a record duration. Since 2001, the Korean subsidiary of Sweden-based Volvo Group has received the accolade every year.

Volvo acquired Samsung’s construction equipment business based in Changwon for $500 million to set up Volvo Group Korea in 1998, hardly anticipating that exports would hit $2.1 billion from November 2010 to this October.

It also ranks as one of very few Volvo subsidiaries that have research and development, manufacturing, and sales operations all under one roof and is able to produce a diverse range of construction equipment. Meanwhile, the R&D center also develops products for Volvo’s global operations.

“We follow global standards in manufacturing, and at the same time, we have kept our traditions and local culture in internal management,” said Volvo Group Korea CEO Suk Wi-soo. “In terms of quality and service, we’ve always had a customer-oriented approach.”

The award is given to companies which rank among the top five manufacturers for their respective products in terms of global market share. According to the ministry, 405 Korean products have this status. Another 186 are believed to have the potential to join this exclusive club within five years.

The manufacturers of these 591 products were lauded for helping the country achieve annual trade volume of $1 trillion earlier in December at a ceremony held on Dec. 21. Korea was one of fewer than 10 countries to have achieved this feat.

Leading food producer Daesang - which has built its reputation on the back of its hot pepper paste and seasonings - was also on the coveted list after its exports grew 76 percent from last year. The company’s Hong Cho vinegar was named as a potential market leader after it became an instant hit in Japan, where it ranked 18th on the island country’s hit product list and second in the food category this year.

Much of this success boiled down to the savvy manner with which Daesong rode the coattails of the burgeoning Korean Wave by having top girl group KARA - itself a sensation in Japan - appear in the company’s TV commercials and advertisements there. As a result, sales leapt from 1.4 billion won ($1.2 million) last year to 50 billion won, giving Hong Cho a vice-like stranglehold on the vinegar market.

“The Japanese are used to the monotonous taste of vegetable-based vinegar, but we added pomegranate and blueberry to differentiate our product,” spokesman Park Cheol-hong said.

“After KARA started appearing on our commercials, we saw a huge increase in the number of buyers inquiring about our products,” added Yoo Yun-sang, head of Daesang Japan.

The company’s hot pepper paste, meat marinade and chlorella natural health supplement were also chosen as world-class products by the ministry, while its solar salt was tipped to join them in the future.

The meat marinade, which is a mixture of naturally brewed soy sauce, pear juice, red wine and sake, is hugely popular in Japan, Australia, the United States and Mongolia. The selling points of Solar Salt are that it is made in a pollution-free environment in South Jeolla and has less sodium, but more minerals, than its hugely popular global rival Guerande of France.

Korea is often praised for its advanced IT infrastructure and criticized for its high credit card usage, but few know its smart cards are another leading export item. These are an advanced form of magnetic cards featuring integrated circuit (IC) chips, such as IC credit cards, electronic identification cards and USIM cards for cell phones. USIMs act like tiny computers that can deal with a number of mini-applications, such as doubling as a subway or bus card.

KEB Technology, which exports smart card solutions and systems to 60 countries, saw its annual shipments overseas grow from 15 billion won in 2009 to an estimated 69.7 billion won this year. Its smart card was named a “next-generation, world-class product” by the ministry. Now, exports account for 56 percent of its total sales. The company also won electronic identification card deals in Thailand in 2007 and 2009, and India last year.

“KEB Technology is highly likely to win Korea’s electronic identification card deals, which are expected to begin in 2013, because it is the first local company to have clinched major deals outside the country,” said Park Si-young, an analyst at HMC Investment Securities.

Meanwhile, many raw material producers also picked up the award.

KP Chemical was feted for the success of its purified isophthalic acid (PIA), a main material for polyethylene terephthalate (PET).

The company became only the seventh company in the world, and the first in Korea, to develop the material around a decade ago. It now ranks as the biggest producer of PIA, with a 25 percent global market share this year. The company exported 90 percent of its PIA output, or 163,000 tons, in 2011.