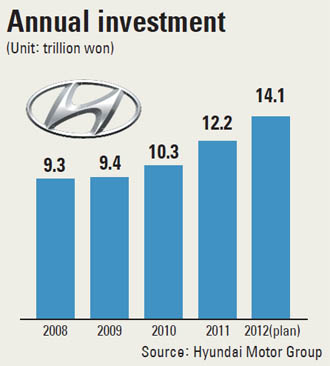 Hyundai Motor Group, the country’s second-largest conglomerate by assets, said yesterday it will invest a record 14.1 trillion won ($12.2 billion) next year, mainly focusing on research and development. This is a 15.6 percent increase from its expenditure this year.

The group will also go on an unprecedented recruitment drive in 2012 as part of efforts to help revive what is expected to be a sluggish economy.

“Expanding our investment in R&D will allow us to secure new technologies, while boosting facilities is aimed at improving product quality,” said an official from Hyundai Motor. 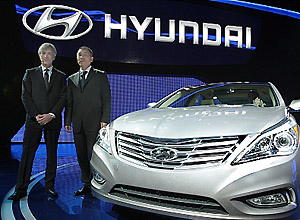 This year, Hyundai Motor and Kia Motors started selling hybrid versions of their respective Sonata and K5 sedans. They said they plan on expanding the number of hybrid models in 2012 based on steady investment in this sector.

Kia also recently unveiled its Ray EV, the electric version of its box-car Ray, and announced it will be supplying 2,500 units to government offices and public institutions next year, with the aim of expanding this to the public the following year, the group said.

Facilities spending next year for Hyundai and Kia will be focused on building new manufacturing factories in the domestic and overseas markets and also on improving customer service and brand image.

As for Hyundai Steel, one of the group’s subsidiaries, it will spend 1.5 trillion won on the construction of its third blast furnace. Construction began in April.

Compared to this year, Hyundai Motor Group has ramped up investment at home more than overseas.

A Hyundai Motor official said the money to be spent inside the country will help stimulate the local economy and lead to the creation of new jobs.

Hyundai’s focus on the domestic market comes after the government announced recently that it will focus on boosting domestic demand to fight external uncertainties stemming from the euro zone debt crisis.

Meanwhile, large companies have expressed concern that their exports to major developed nations like the United States and the European Union will continue to decline.

Based on its record investment, Hyundai will hire 7,500 new staff, a record number for the group. This number includes 1,000 college students who will come on board as interns.

The conglomerate also appointed 56-year-old Yoo Young-hak, a former health and welfare vice minister, as the full-time chairman of the Hyundai Motor Chung Mong-koo Foundation. Yoo will begin his role starting next month.

The conglomerate said earlier that it will offer tuition fees for 13,000 university students next year as they struggle with mounting debts and high interest rates.

It also said that the foundation will run educational programs for students that live in rural areas, such as farming and fishing villages that have restricted access to decent education systems.

Hyundai Motor Chairman Chung donated 500 billion won from his private assets to the foundation in August, which was the largest personal donation ever made in Korea.

The move came as the government has been emphasizing shared growth between large and small companies.