Park pulls back on idea of GNP purge

Park pulls back on idea of GNP purge 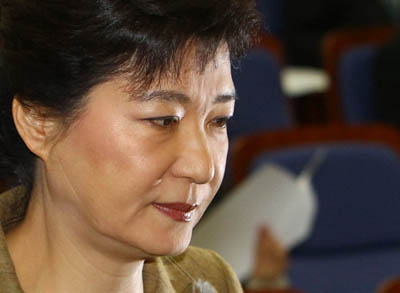 The professor made similar remarks to other news media, prompting concerns of a possible rift in the GNP. Those identified as the targets of the purge reacted with fury, and other senior members of the GNP also expressed worries that the emergency council was creating an internal rupture by fueling factionalism instead of working for unity.

Park acted quickly yesterday to play down the significance of the professor’s remarks.

“It is a personal opinion [of Professor Lee],” Park told reporters as she entered a GNP lawmakers’ caucus yesterday morning. Asked if the whole council agreed with Lee’s demands, Park said, “I will talk about it at the caucus.”

In her opening address at the caucus, Park addressed the issue of getting new blood in the GNP, but she did not pinpoint any targets for expulsion. “We can all be initiators of reform and we can all be targets of reform,” she said. “But we cannot succeed in our reform when we draw a clear line between the initiators and the targets.”

Recruiting fresh faces ahead of the April legislative election is a key task of the GNP. About 100 days are left before the election on April 11, and the liberals have united to counter the conservative ruling party amidst the unexpected rise of independent candidates as a new political force. The general election outcome is also seen as an important factor for the presidential election that follows in eight months.

According to the National Election Commission, 980 candidates have already registered their preliminary candidacies at 245 electoral districts nationwide. Of the 980, 306 are Grand Nationals while 389 are from the largest liberal opposition group, the Democratic Unity Party.