Real-name Internet law on way out

Real-name Internet law on way out 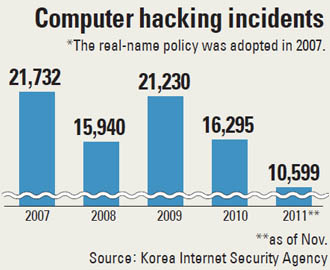 The Korea Communications Commission said it will phase out the requirement for Internet sites to collect the residential registration numbers of its users.

The move came after millions of people’s personal information was accessed by the hacking of servers of popular Korean Web sites.

The KCC said in a presidential reporting session yesterday that it will “review the real-name Internet identification policy for now.” It is the first time the government agency said it would discard a policy that has caused controversy at home and abroad for five years.

The KCC plans to phase out the requirement. From next year, Web sites with over 10,000 users a day will not be allowed to gather registration numbers. From 2013, all sites will be subject to the ban. From 2014, sites that violate the ban will be fined.

The real-name policy was implemented in July 2007 to prevent Korean netizens from abusing the anonymity of the Internet. In 2007, an actress committed suicide after malicious comments about her spread on the Internet, many of them anonymous.

But there was opposition from the start. Ordinary users said the government was infringing on freedom of speech on the Internet. Foreign companies accused the government of the same thing. In 2009, YouTube banned Korean users from uploading video files onto its site to show opposition to the Korean policy.

Recently the policy has been seen as a security risk and a possible boon for identity thefts when hackers managed to gain the registration numbers of millions of Koreans.

The KCC said it inevitably reviews its Internet-related policies since the online environment is evolving rapidly with the spread of social network services, including those based overseas.

“If the real-name policy is only applied to domestic portals, it would trigger reverse discrimination against Korean Web site operators,” said the KCC. 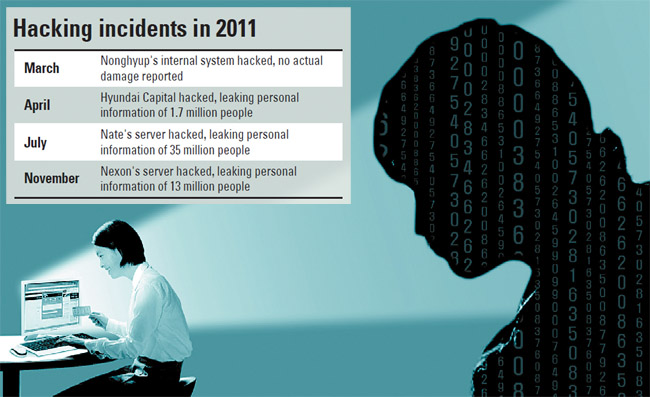 The authority also pointed out the policy has been an obstacle to Korea becoming a global player in IT.

The KCC plans to create a task force team to analyze the advantages and disadvantages of the real-name policy, changes in the Internet environment and technological developments to come up with measures to improve its policy.

When the current policy is revised, collecting or using registration numbers of individuals will be considered an illegal act.

“The controversial policy is finally being junked,” wrote an Internet user. “If the policy was scrapped a year earlier, the damage by hackers could have been limited.”

Earlier however, Korea’s three major Internet portals and two game sites announced they would not require residential registration numbers from subscribers anymore, anticipating a change in the policy.

Naver and Daum, the No. 1 and No. 2 portals in the country said last week they will stop collecting registration numbers of users at the end of December and delete the information they have stored.

NHN, operator of Naver, has prepared a simpler subscription system. Daum has been using a simplified system for two years and doesn’t collect users’ registration numbers, although they are provided to a government agency.

Nexon, the largest game company in Korea, followed suit. The company said it will not store registration numbers of game players from April. Nexon suffered a leak of personal information from about 13 million users when one of its servers was compromised by hackers in November. NC Soft, another gamemaker, and the Nate portal also jumped on the bandwagon.

“The initial purpose of the real-name policy was reasonable, but it is the nature of the law that it can’t catch up with fast developing technology,” said Lim Jong-in, dean of the Graduate School of Information Security at Korea University.

Lim said that when the policy was first introduced, the government couldn’t anticipate the rise of SNS, especially those whose servers are in other countries.

“The government has taken action in the right direction,” Lim said. “Later on, the country needs to reach a social consensus on the use of registration numbers, especially on the Internet.”