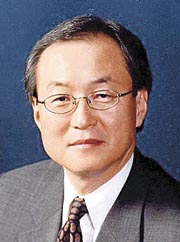 Korea named a veteran economist as its new trade minister yesterday and Kim Jong-hoon stepped down after playing a pivotal role in finalizing a long-stalled free trade agreement (FTA) with the United States.

Bark Tae-ho, a professor at the Graduate School of International Studies at Seoul National University, was nominated as Kim’s replacement, an official at the presidential office said.

The 60-year-old Bark was born in Busan and served as commissioner of the Trade Committee at the Ministry of Knowledge Economy. He was appointed as part of a minor cabinet reshuffle announced yesterday.

Kim, a hangover from the previous Roh Moo-hyun administration, left the post after four years and four months. He was the only minister to retain his position when Lee Myung-bak was sworn in as president in 2008. 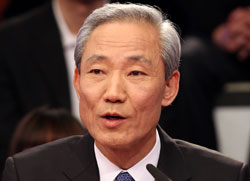 “I have been the minister for too long,” said Kim, who led FTA negotiations with the U.S. as Korea’s chief negotiator since 2006.

“Looking back, it was a tough journey. The hardest time was in 2008 when the public was protesting U.S. beef imports,” he said, heaving a visible sigh of relief at conducting his exit strategy during an interview with the JoongAng Ilbo.

Occasionally beset on all sides, Kim was even branded a “traitor” by opposition party members at times.

But he successfully steered the FTA deal through to fruition, even resorting to using his Twitter account to promote it.

“I am sure the FTA will have a positive impact on the Korean economy,” he said.