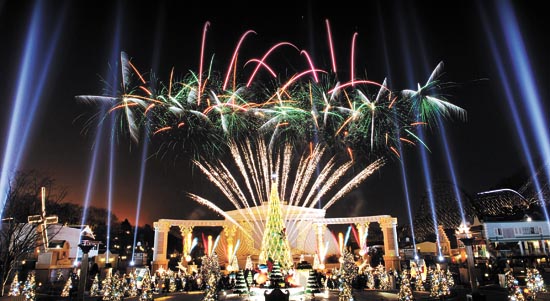 Everland in Gyeonggi will launch more than 6,000 fireworks after the countdown to the year 2012. Provided by Everland

And just like a birthday that comes and goes once a year without anything special to mark it, you may be debating about which plan will make your day one to remember.

There are two different fields of activity.

Night owls can turn out for midnight countdowns and reflect on what went well or poorly in the past year. Early birds can wait for the Year of the Dragon’s first sunrise and set New Year’s resolutions, hoping that this year they can keep them for longer than three days.

If night owls celebrate the coming of a new year in more festive ways, early birds will be more sedate as they wait for good things to come.

Whichever suits, Seoul is packed with year-end or New Year’s activities. No need to go farther than the city’s outskirts since programs for night owls and early birds abound, some with fireworks, others with balloons bearing letters written to eternity. If one can decide whether to stay up late or wake up early, the rest of the plan shouldn’t take up too much time. 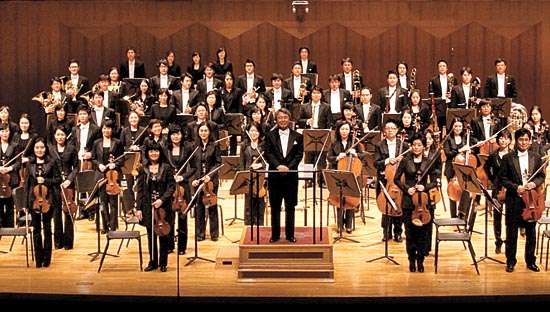 Although events are packed with similar activities, they can carry very different sentiments. The big decision is if one wants music or not.

If music is desirable, going to theme parks can be one option. At Lotte World, dancing B-boys will join K-pop groups, including Block B and popera singer Hur Jin-seol, who garnered recognition after her performance at the musical “Phantom of the Opera” (2001) to catch the eyes of younger visitors.

Both venues have prepared grandiose fireworks to celebrate the coming of the New Year at midnight. If fireworks are key for New Year’s, Everland is the place to go, since the theme park plans to launch more than 6,000.

Jumping into classical music and dance can be another way to go, but you better check to see if the performance you want to see is sold out. 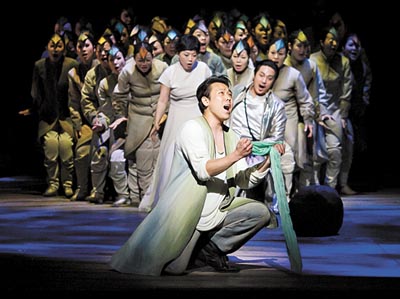 Korea National Opera’s annual “2011 Opera Gala Big Night,” which incorporates dancing into the performance, and Seoul Arts Center’s annual New Year’s Eve concert are both sold out. Seoul Arts Center, which has presented New Year’s Eve concerts for the past 18 years, is shooting off fireworks and flying balloons with personal messages attached after the concert at its venue in Seocho District, southern Seoul. Anyone can join the after-concert events even if you can’t make the show, but if one wants the overall concert experience, reserving tickets a month in advance is highly recommended.

If you are not one who made that call, don’t worry. Tickets for the Sejong Center for the Performing Arts’ year-end concert “Propose 2012,” featuring soprano Shin Yeong-ok and other artists, are still available. Sejong Center, located in central Seoul, holds an event in which it will send a card on which you write a message to any address in one year.

Concerts might be fun even if you’re not a classical music fan because the whole point of going is to listen to soothing music as you walk down memory lane, not understanding the meticulously composed pieces.

If a resonating bell is a must on New Year’s Eve, there are places less crowded than Bosingak. 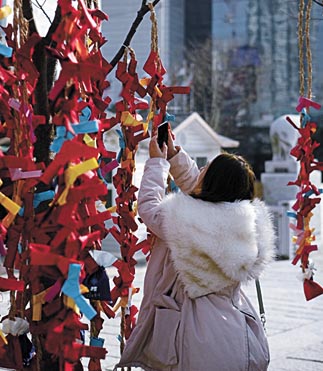 Visitors to Bongeunsa Temple in Gangnam District, southern Seoul, can write New Year’s wishes on pieces of paper and tie them along the pillars to the temple. Provided by Bongeungsa Temple

Bongeunsa Temple in Samseong-dong, southern Seoul, is also holding a bell ringing ceremony. Afterwards, visitors can share tteokguk at the temple to celebrate the New Year. Tteokguk, a rice cake soup, is the staple dish Koreans have traditionally eaten on New Year’s Day. People can also write their New Year’s wishes on small pieces of paper and hang them by the temple buildings.

The bell ringing ceremony at Bosingak, in Jongno District, central Seoul, will be as crowded as ever. Nearby roads to Bosingak, including Wujeonggukro, Cheonggyecheonro, and Mugyoro, will be blocked from 10 p.m. today to 1:30 a.m. tomorrow. Also, subway line No. 1 will not stop at Jonggak Station to minimize the crowd flow from 11 p.m. to 2 a.m.

If you are looking for a more romantic way to celebrate the last day of the year, catching a cruise ship on the Han River is an option. The ship departs Yeouido Hangang Park at 2 p.m. for coastal Jungseojin in Incheon. It will arrive in time for you to watch the sunset with that special someone. Transportation back to Seoul is by bus. Advance reservations are required at www.hcruise.co.kr or call (02) 3271-6900. 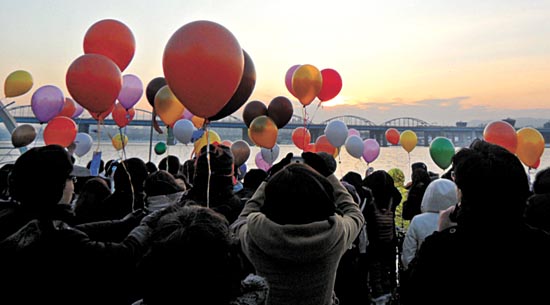 Seoulites cruise the Han River on New Year’s morning, then fly balloons as they wish for well-being in the following year. Provided by Hangang Land

As tomorrow is the first day of the New Year, many will want to wish for good luck while they watch the sunrise. But, you might need to lower your expectations since the recent snowy weather could hinder clear viewing.

The most popular place for watching a New Year’s sunrise in Seoul is Mount Achasan in Gwangjin District, eastern Seoul. You can see the sunrise earlier from Achasan than any other spot in the Seoul area. Needless to say, it attracts around 50,000 people each New Year’s Day.

Considering the sun will rise around 7:40 a.m., the Sunrise Festival starts at 7 a.m. on the mountain’s Sunrise Square. It takes more than 30 minutes to get to the square from the mountain entrance, and it will be packed. It is common to hike up the trail at around 5 a.m. to beat the crowd.

Even in the heart of Seoul, you can watch the sunrise at Namsan Palgakjeong Pavilion, reiterate your New Year’s resolution and wish for luck as you fly balloons in the sky.

Taking a walk in the Han River parks is another option. You can see the sun rising over the bridges since the sunrise cruise that sails on the river for more than an hour is sold out.