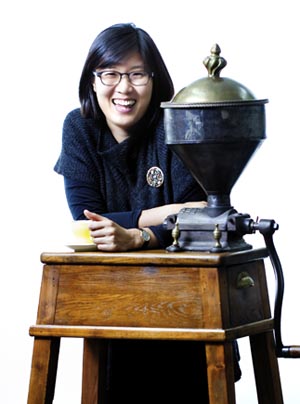 Life changes sometimes happen all at once. For others, change is gradual. The latter is true for Lee Yoon-seon, the 36-year-old vice president of Terarosa, a coffee factory and shop in Gangneung, Gangwon.

She worked for Munhwa Broadcasting Station (MBC) as a producer in Gangneung until 2006 and joined Terarosa in 2007, without professional knowledge about coffee and coffee making. Today, she is the first Korean judge for the Cup of Excellence, an award given for specialty coffees.

How did Lee’s life become intertwined with coffee?

“When I was a documentary producer at MBC, I filmed at Terarosa in 2002, when it opened,” Lee said. “That’s when I met Kim Yong-deok, the head of Terarosa.”


Q. Did you fall in love with coffee that moment that you quit your job?

A. I quit my job in 2006, but that decision had nothing to do with coffee. Back in the old days, it was very difficult to become a producer as a female. I applied to become a producer three times over a period of three years and became one in the end. At first, I was really happy. But after around five years, I started to look around at what others are doing.

And then I thought, “This isn’t what I expected for my life.” So I quit, without any backup plan. [When Kim, the head of Terarosa heard that Lee quit her job, he called her and asked her to join.

At first, Lee demurred, but three months later, she found herself working at the cafe.]

What was your role at Terarosa when you first joined?

At first, I was told to do anything I wanted. So I observed employees at Terarosa — how they made coffee. But I found something strange. Everyone had his or her own way of brewing. The problem was that there wasn’t any system. Ever since, I have tried to establish a basic system for brewing coffee. This would allow us to find our own color as a coffee shop. Back then, though, there wasn’t a decent book about coffee. Kim, the head, even had to purchase a book written in Japanese and was translating what had been written there into Korean. Then, I started to search online — foreign Web Sites like Amazon. I bought books about coffee from Amazon and read papers published by the Illy [a popular Italian coffee brand] Research Center on the chemistry of coffee.

Were you able to establish a system?

Not really. Studying the different processes of brewing coffee didn’t help much. So I decided to visit famous coffee shops in the United States and Europe. It was a shock. Everything there was done scientifically.

For example, David Schomer, the owner of a coffee shop called Espresso Vivace, had wasted two kilograms (4.4 pounds) of coffee beans every day for the past 10 years to study and research coffee before extracting the most ideal taste. In Europe, coffee shop owners were studying coffee machines and facilities to find the best roasting process.

It seems the coffee industry in Korea is developing rapidly.

Koreans jumped from drinking instant coffee to specialty coffee. Starbucks played a big role in this.

College students who taste specialty coffee no longer search for instant coffee when they earn money. Overseas producers of coffee are also keeping a close eye on the Korean market. They even participated in the 10th Seoul Cafe Show for the first time.

There are also criticisms that so many coffee shops have randomly opened as of late.

As for large conglomerates, it’s good news because running a cafe or a coffee shop brings good money. But what’s important is that from now on, customers will be very sensitive to the coffee taste.