Mom’s Seoul trip could be her last

Mom’s Seoul trip could be her last 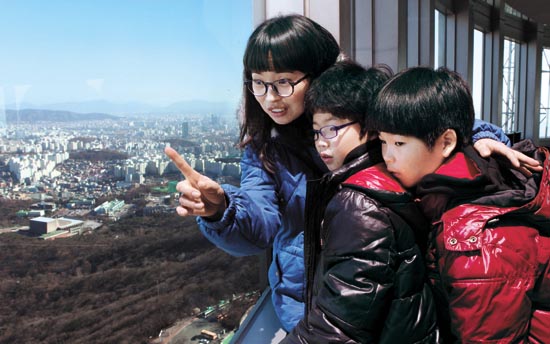 Son Wan-seok, 38, left, who is suffering from Behcet's disease, looks at the cityscape with her sons at Namsan Tower. By Kim Ki-hwan


The family of three’s trip to Seoul was about to end. “Let’s come again next time, mom,” the two boys begged their mother.

But their mother hesitated. There might be no “next time” for her.

“You two can visit here again, can’t you?” she said with a smile.

Son is suffering from Behçet’s disease, an incurable illness in which inflammation occurs in blood vessels accompanied by extreme pain.

Inflammation can occur not only in organs such as the heart and lungs but also in the mouth, genitals and eyeballs. The disease can be treated to reduce the symptoms and slow its progress.

Son, who was diagnosed in 2005, got cold scores in her mouth and suffered from pain in her joints. As the symptoms worsened, she separated from her husband in 2007 and is now living off a pension to cover basic living costs. She stays in hospital about 10 days per month.

“I’m not sure when I will go blind since my eyes are now near losing sight,” Son said. “If it is not this time, I may never get a chance to go on a trip to Seoul with my children again.” Son received surgery on her joints on Monday.

Arriving at Namsan Tower after having departed from Hwasun at 7 a.m., the family went to the top and looked at downtown Seoul. Even when the two excited sons were running around, they always held their mother’s hands.

“I wanted to let my sons look around and enjoy themselves, but they seem to be more concerned about me,” Son said. That afternoon, the family spent time in Lotte World in Jamsil, southern Seoul. Minseong, the elder brother, kept asking his mother if she was okay waiting in line, and he also massaged her legs.

“We’d better stop riding this since mom is getting tired,” said Min-ho, the younger son, seeing Son feeling dizzy after riding on a spinning dish-shaped ride.

The sons take turns cleaning and washing the dishes for their mother, who has to stay in bed at home. “They seem too mature so that they even worry about their mom having to clean the house if they don’t do it,” Son said. “Whenever I am in the hospital, they always come and stay with me after school.”

The trip was also a present for Son that Min-seong and Min-ho prepared. They applied to a wishgranting fund sponsored by CJ Donors Camp, asking to go on a trip to Seoul with their mom.

“Most of the children want food or toys. However, a wish to have a family trip with a sick mother touched my heart, so I decided to help them,” said Gwak Dae-seok, 56, a director of CJ Donor’s Camp.

“This trip may be the first and last,” said Son. However, her sons wrote, “I want to travel with my mom again,” on a padlock they affixed at the gates on top of Namsan Tower, a popular custom for people who want to stay “locked” with their love ones. The family hopes this trip will not be the last.