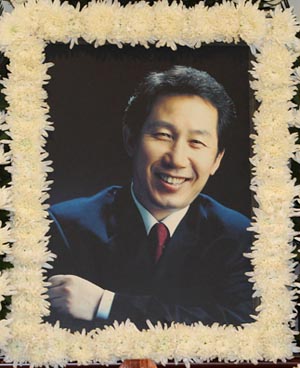 A portrait of Kim Geun-tae. [YONHAP]

Kim Geun-tae, a political heavyweight among Korean liberals and a champion of the pro-democracy, anti-dictatorship movement, died yesterday, his family and aides said. He was 64.

Kim, who headed the then-ruling Uri Party during the former Roh Moo-hyun administration, was one of the most renowned activists for democracy and human rights when Korea was under the iron-fisted military regimes of the 1960s, ’70s and ’80s.

Kim was arrested 26 times, put in house arrest frequently, spent 10 years on the wanted list, and was sent to jail twice for a total of five years and six months.

After suffering from Parkinson’s disease for years, which his family said was the result of severe torture by the military regime, he was admitted to Seoul National University Hospital on Nov. 29 to receive treatment for cerebral venous thrombosis. He died of pneumonia, the family said.

“We have lost a great national leader,” said Chung Sye-kyun, former chairman of the Democratic Party, the successor of the Uri Party, after paying tribute to Kim at his wake yesterday. “Those left behind have to follow his will and make democracy advance further.”

Many politicians, including some from the conservative camp, visited the hospital to attend Kim’s wake. Park Geun-hye, the interim leader of the ruling Grand National Party, told reporters yesterday that she was expressing deep condolences to Kim’s family and praying for his wellbeing in another realm.

President Lee Myung-bak sent flowers to Kim’s funeral altar yesterday. The bereaved family and his aides declined to receive them at first, but later changed their minds.

“Kim considered the rule of President Lee as a form of private dictatorship and he hoped the general and presidential elections of 2012 would pass judgement on it,” said former Democratic Party lawmaker Woo Won-sik, who was close to Kim.

Born in Bucheon, Gyeonggi, on Feb. 14, 1947, Kim entered Seoul National University (SNU) in 1965 to study economics. He was kicked out in his junior year after participating in an anti-government demonstration but was later reinstated. He was charged as a member of a treasonous conspiracy with other SNU students in 1971 and went into hiding until the Park Chung Hee regime ended with Park’s assassination in 1979.

Kim resumed his anti-dictatorship activities after the military regime led by Chun Doo Hwan took power in 1980. After establishing the Youth Federation for Democracy in 1983, the first organization against the dictatorship, he was arrested in 1985 as the leader of the SNU’s student activists. During 22 days of detention by the Agency for National Security Planning, the predecessor of the National Intelligence Service, Kim suffered nearly 15 days of electric and water torture by infamous police superintendent Lee Geun-an, known as “The Torture Artist.”

Kim later recalled that he endured the torture by thinking about his wife, In Jae-geun. “I am forever indebted to her for having protected my soul during my countless imprisonments and police chases,” Kim once said.

According to friends, In visited Kim at the Seoul Detention Center following his 22 days of torture on her birthday. Kim tried to sing the song “Maze of Love” to her, but his body was so battered he couldn’t perform it normally. She laughed at his performance and acted as if she was having fun during the 20-minute meeting, only breaking down in tears after she was out of his sight. Since then, the couple’s favorite song was “Maze of Love.”

Recruited by the late former President Kim Dae-jung in 1995 to join politics as the vice chairman of the Democratic Party, Kim won his first lawmaker seat in 1996, and won two more terms. He and other liberal politicians created the Uri Party in 2003 during the Roh administration and he was elected as the party’s first floor leader. He also served as the party’s chairman from 2006 to 2007 and was a health and welfare minister for the Roh administration.

After being diagnosed with Parkinson’s disease in 2007, Kim left politics. On Oct. 18, he posted a message on his blog that read, “Let’s occupy 2012.”

Kim is survived by his wife and two children.