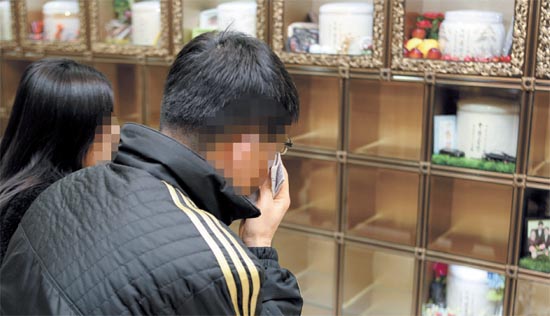 The mother and father of a 13-year-old school bullying victim who committed suicide last week cry yesterday as they look at his ashes in a vault at Dorim Temple in Daegu. By Gong Jeong-sik


While the country mourns the tragic suicide of a middle school bullying victim surnamed Kwon, 13, in Daegu, similar tragedies are putting the spotlight on the roles of schools and teachers.

On Thursday morning, a middle school student surnamed Song, also aged 13, was found dead hanging in a stairwell of his apartment in Gwangju.

The Gwangju Bukbu Police are assuming that Song killed himself due to excessive pressure from an exam he recently took at school.

His report card was scheduled to be sent out on Thursday, and according to police, Song hanged himself on Wednesday evening after coming home from school.

However, Song’s father, 44, believes his son was a victim of school violence because he heard Song’s friend talking about his son being bullied by a student who forced him to purchase cigarettes.

The father told the police the school is trying to cover up the case, arguing that the principal of the school came to the funeral and “made a gesture” to prevent classmates from coming inside. The father said teachers told Song’s classmates not to attend the funeral.

Teachers at Song’s middle school yesterday said they were shocked by the father’s accusations. Kim Gil-hwan, the principal, told the JoongAng Ilbo, “I wish there had been CCTV footage of the funeral so the truth would be revealed.”

Police questioned 20 of Song’s classmates, but none mentioned any violence against Song. Song’s teacher, who is surnamed Park, told the police that he talked to Song for 30 minutes after school on Wednesday to ask him whether he was being bullied by the student to purchase cigarettes or whether the student was forcing Song to give up his own cigarettes.

According to police, Song didn’t answer the teacher’s question about the bullying and changed the conversation to his concerns about getting into high school with his grades.

Lee Jae-hyun, an official at Gwangju Bukbu Police Station, said they will “expand the investigation as there’s a possibility that Song could be a victim of school violence.”

But, he said, the police will not rule out the possibility that stress over grades was his main concern because he apparently ran away from home in July after receiving some low grades on exams.

Another suicide of a Daegu middle school student surnamed Park, 13, that happened in July is also causing controversy. It was recently disclosed that the girl wrote a letter to her teacher asking for help because she was being bullied before killing herself.

According to Park’s family, after reading Park’s letter, the teacher punished the entire class by making them kneel on top of their desks for several minutes. After returning home that day, Park jumped from the top of an apartment building.

Park’s family said their daughter must have been afraid of retaliation from her classmates following the teacher’s “injudicious” punishment.