From ruins to modernity, captured through the lens

From ruins to modernity, captured through the lens 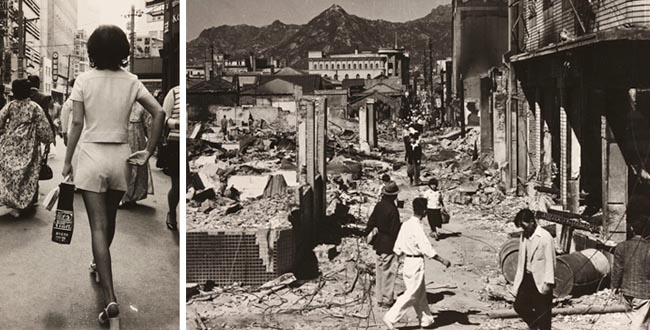 Left: Limb Eung-sik’s “Short Pants” (1971) captures a woman dressed in high-end fashion on the bustling streets of Myeong-dong, central Seoul.
Right: “Myeong-dong” (1950) captures the ruins of the same neighborhood during the Korean War. Provided by the museum


Photography is often categorized under a variety of genres, from fine art to photojournalism, but many artists have hovered along these borders. Limb Eung-sik (1912-2001), a pioneer of photography in Korea, was one such photographer.

Limb started as a fine arts photographer in the 1930s, but when the Korean War broke out in 1950, his work evolved, recognizing the power of documentary or realist photography. What he called “life-centered photography” became his focus in the 1950s.

But Limb did not abandon his artistic qualities. Works like “Korean Ancient Architecture” and “Korean Artists,” which he shot in the late 1960s for a series in Korea’s famous architecture magazine Space, exemplify the continuation of his artistic roots. These photos represent a blend of his realist approach with earlier projects.

Reflecting the characteristics of Limb and his work, an ongoing large-scale retrospective of the photographer is being displayed at the Deoksu Palace branch of the National Museum of Contemporary Art in central Seoul, titled “Lim Eung-sik: Art of Recording, Records of Art.” 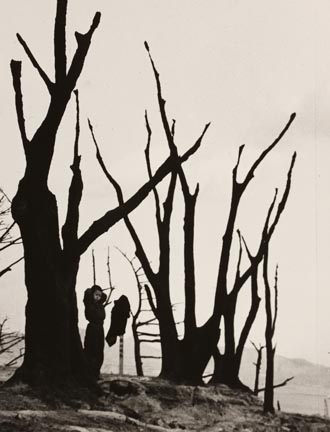 Limb Eung-sik’s “Bare Trees” (1953), above, is on display at the Deoksu Palace branch of the National Museum of Contemporary Art. Provided by the museum

The exhibit, held to commemorate the 100th anniversary of Limb’s birth, features 200 pieces of his photography. Some 160 pieces are from the national museum’s collection, and the other 40 are previously unseen photos from a collection provided by Limb’s family, the museum said.

“Before the Korean War, Korean photographic works were mainly fine art photographs including ‘pictorial photos,’ a genre which had been popular since the Japanese colonial period,” the contemporary art museum said in a press release.

“In 1957, Limb held a photography exhibition titled ‘The Family of Man’ at the National Museum of Contemporary Art, which was located at Gyeongbok Palace at that time. The exhibits displayed ‘life-centered’ photography, which frankly expressed the realities of society and the lives of people on the basis of humanism. It gained great popularity among Korean youth and rose as the mainstream genre of Korean photography during the 1950s and 1960s.”

The ongoing exhibition is divided into four sections. The first shows Limb’s conversion from fine art landscape photos and experimental photogram works (photographic images taken without a camera by placing objects directly on the surface of photo-sensitive materials) to wartime photography.

The second section features his “Korean Ancient Architecture” and “Korean Artists” series, which will show his works have both documentary and artistic qualities.

The third section could be the highlight of the retrospective. It features Limb’s photos of Myeong-dong, one of the old high streets of Seoul, from the 1950s to 1990s. Most of them are owned by his family and have never been released to the public.

They capture the ruins during the Korean War and young women in bell-bottoms in the 1970s, telling viewers the story of the rapid restoration and further changes of not only Myeong-dong but also Seoul and Korean society itself after the war.

“He took pictures of everything in Myeong-dong - not only the miserable scenes directly after the war, but also the bustling streets after the restoration and the fashion of women walking on the streets,” said Hong Soon-tai, a veteran photographer who was a student of Limb, at the press preview of the exhibition late last month.

The fourth section includes a collection of photos by his students including Hong, which will be displayed under the title Dedication of Memory.