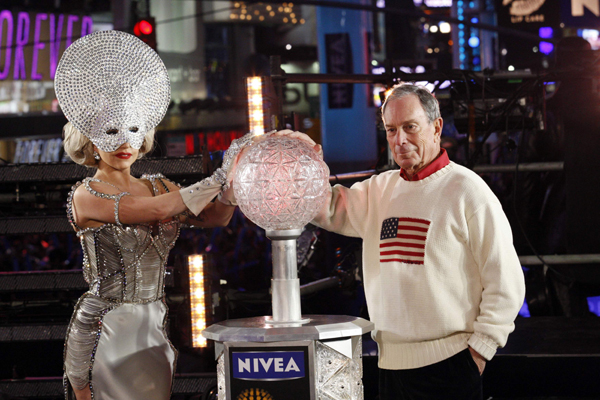 NEW YORK - Hundreds of thousands of people crammed into New York’s Times Square to bid farewell to the old year and watch Lady Gaga trigger the famous drop of a crystal ball marking the start of 2012.

A raucous crowd that New York police said was expected to reach up to a million people enjoyed unusually warm weather, screaming and cheering in front of a top-drawer lineup of entertainers including Lady Gaga and Justin Bieber before midnight Saturday.

The crowd spilled from the “Crossroads of the World” into adjacent avenues in the biggest U.S. public celebration of the New Year, which climaxed with the slow slide of a huge crystal-encrusted ball.

Gaga, dressed in a huge silver mask and matching dress, and New York Mayor Michael Bloomberg pressed the switch to send the glittering ball on its descent. Confetti poured over Times Square and elaborate fireworks lit up the sky over Manhattan.

Times Square has hosted the Big Apple’s biggest party since 1904, with the ball drop starting in 1907. The fact that New Year’s Day fell on a Sunday and relatively balmy temperatures for winter helped boost this year’s turnout.

Police Commissioner Raymond Kelly said there would be huge security for what he expected to be a record crowd.

Backpacks and alcohol were banned, and many revelers were forced to wait for hours behind penned-off areas.

Thousands of police officers, including 1,550 newly minted graduates of the police academy, were deployed, along with bomb sniffing dogs, sharpshooters and antiterrorism units.

“Our helicopters will be up in the air and checking the 200-block area around Times Square,” Kelly told the CNN television network on Friday.