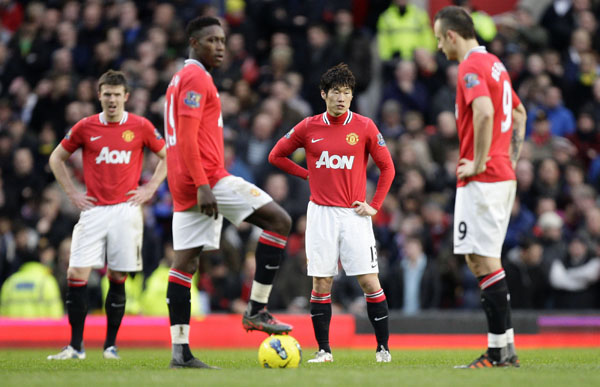 
LONDON - Alex Ferguson’s 70th birthday was ruined by Manchester United’s stunning loss to struggling Blackburn, and Chelsea slipped out of the Premier League’s top four with a home defeat by Aston Villa on Saturday.

Goalkeeper David de Gea’s mistake allowed Grant Hanley to pounce in the 80th minute and give Blackburn a 3-2 win at Old Trafford.

The surprising setback for the defending champions means Manchester City can go three points clear at the top by winning at Sunderland on Sunday.

“We weren’t at the races. Too slow, too labored. Not quick enough,’’ said Phil Jones, who left Blackburn for United in the offseason. “The injuries don’t help. But they are no excuse. We were nowhere near good enough. .?.?. They thoroughly deserved their win.’’

Third-place Tottenham slipped up as well, drawing 1-1 at Swansea to sit six points behind United.

The bigger winner of the day was Arsenal, which went fourth with a 1-0 victory over Queens Park Rangers after Chelsea slumped to its fifth loss of the season, with Villa winning 3-1 at Stamford Bridge.

Consecutive 5-0 routs for United before facing struggling Blackburn had pointed to another easy victory on Ferguson’s landmark birthday.

Ayegbeni Yakubu, though, wasn’t in a giving mood, scoring with a first-half penalty and a low shot past de Gea six minutes after the break.

Dimitar Berbatov hit back with two quick finishes inside the area, but United couldn’t stage another comeback after Hanley’s winner. Blackburn manager Steve Kean hopes supporters will finally stop calling for him to be sacked by the Indian owners.

“The owners are behind me, and the players are behind me. Now, I’d like to think there could be a truce between me and the fans,’’ Kean said. “It would be good if the fans who have been negative will turn because we want Ewood Park to be a place where there is an intimidating atmosphere.’’

United’s New Year’s Eve misery was shared by Chelsea. Didier Drogba gave Chelsea the lead from the penalty spot in the 23rd minute after he was fouled by Richard Dunne, but the lead lasted only five minutes.