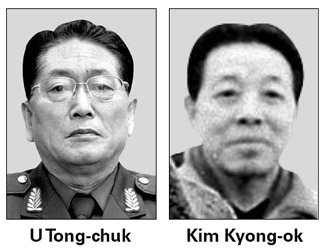 Analysts consider them to be key allies of Kim’s within the ruling elite.

U was one of the seven people who accompanied the hearse carrying the coffin of late leader Kim Jong-il, with Kim Jong-un, at the funeral service last week, who are now considered the inner cadre of North Korean politics.

U was born in 1942, the official birth year of Kim Jong-il, and the two men attended Kim Il Sung University together.

When the late leader entered politics in 1964 as a member of the ruling party’s Organization and Guidance Department, U was appointed to the same post as Kim. In 2009, he became the first director of the national security affairs agency.

In April 2009, U was named a vice-chairman of the powerful National Defense Commission with Kim Jong-un. It was the first time a national security affairs agency official was named to the commission.

Sources say that U was almost purged by his subordinate, Ryu Kyung, who was the former first deputy director of the agency.

However, sources say that Ryu was executed in early 2011 by North Korean authorities who felt threatened by his growing influence.

“After Ryu was executed, U completely occupied the National Security Agency by obtaining support from Kim Jong-un and Jang Song-thaek,” an analyst familiar with North Korea told the JoongAng Ilbo.

Kim Kyong-ok, on the other hand, is a much more shadowy figure. Even his age is unknown. Sources say that he was once a personnel manager in the military.

Until the North’s official Rodong Sinmun reported on Dec. 29, 2008 that he accompanied Kim Jong-un to a national orchestra’s performance, he hadn’t appeared at any official events or in any state media reports.

But on Sept. 27, 2010, Kim was named a four-star general along with Kim Jong-un. And the next day, at a parliamentary meeting, he was appointed a member of the party’s Central Military Committee. Since then, he showed up on most of the late Kim Jong-il’s “field guidance trips.”

“Given the fact that U and Kim were promoted after Kim Jong-un was selected as heir, the two powers will become the ‘wings’ of Kim Jong-un’s rule.”