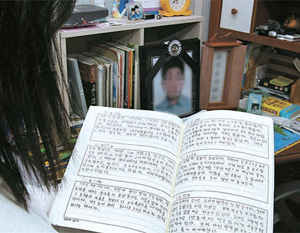 Two middle school boys from Daegu accused of brutally bullying their 13-year-old classmate and driving him to suicide were arrested Saturday.

The Daegu District Court issued the arrest warrant for the two 14-year-old boys, surnamed Seo and Woo, despite their being minors because of the gravity of the issue of bullying, which the case has thrown into stark relief, but also for their own protection in case they too become suicidal.

“Taking into consideration the chance that they will run away and the gravity of the issue at hand, although they are young students, the warrant was issued,” said Kim Hyeong-tae, 50, the judge who issued the warrant, on Saturday.

“The psychological shock will be big, so it is possible that they might choose extreme measures [such as suicide]” he said. The arrest will also give them time for repentance, he said.

After nine months of being bullied by his two classmates, the 13-year-old student surnamed Kwon jumped from his seventh-floor apartment balcony on Dec. 20.

He left a four-page suicide note detailing the abuse he suffered from the classmates, which included beating and water torture. He was also forced to play an online role-playing game using the two friends’ IDs to advance their characters’ standing in the game, eat crumbs off the floor, do their homework and give them money.

Kwon wrote in his suicide note that he “couldn’t ask for help from parents, teachers or police” because he was afraid of retaliation.

The court reviewed the arrest warrant on New Year’s Eve, a Saturday, following a police request and after consultations with Seo and Woo’s parents.

After they were arrested, the two students were seen coming out of the District Court sobbing uncontrollably, with hooded jackets covering their heads and their faces masked, en route to a detention center. They did not respond to questions from the press.

“They need to face a punishment to match the crime they have committed,” said Kwon’s mother, who also said she will bring a civil suit against the bullies’ parents and the school “so that there is never a situation like this again.”

Meanwhile, the parents of Seo and Woo sought out Kwon’s mother on Friday and Saturday, apologizing and saying they will atone for the crime.