Therapist dedicates life to getting over bullying

Therapist dedicates life to getting over bullying 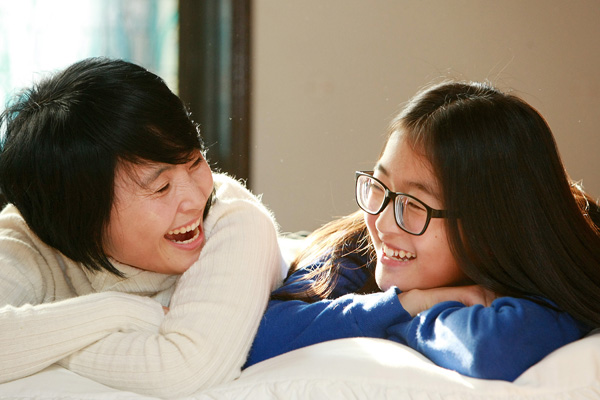 Jin Jin-yeon, left, converses with her daughter Hyun Yu-bin, right, who was once bullied at school, on Dec. 28 at their home in Daegu. By Gong Jeong-sik


Jin Jin-yeon is a laughter therapist.

Since 2007, Jin has visited 500 places, including prisons and nursing homes, and helped more than 100,000 people suffering from bitterness and resentment. Jin tries to teach them to laugh away their pain.

Jin, 39, is helping other people, but also helping herself. She was bullied so badly in her school days that she tried to commit suicide several times. The rest of her life has been a steady recovery from that childhood ordeal.

On Thursday, when the JoongAng Ilbo met with Jin, she introduced herself as a “love activist.” The words “I love myself” are written in thick, bold letters on the wall of Jin’s bedroom in Daegu above a mirror she looks into every morning. Written on her wrist is a thick bold scar from a suicide attempt in the eighth grade when she thought death was preferable to a life of being bullied.

After the suicide of a 13-year-old student in Daegu on Dec. 20, the nation has focused on the constant - and constantly overlooked - problem of bullying in Korean schools. That student, who has only been identified by his surname Kwon, left behind a four-page suicide note that his mother released to the media. Its eloquent agony, and the boy’s poignant sadness of knowing he was voluntarily leaving the family he loved, stunned the nation.

It was only luck that kept Jin from meeting the same fate.

In 1985, during a practice for a school play, Jin got into a quarrel with a friend. She was 13 years old. The friend took the altercation seriously and enlisted other girls to gang up on Jin. From that day on, Jin was slapped in the face and kicked. When she became close to a new friend, the bullies broke up the friendship, telling the other girls she’d become an outcast if she were friends with Jin.

Jin never told her mother or teachers about the bullying because the bullies said they would exact revenge.

When Jin’s older sister spotted bruises on her body, she reported it to the school, and the teachers found out about the bullying. But Jin said the school did nothing. Even Jin’s mother, the breadwinner of the family, shrugged off the bullying. “This is what happens among young students,” she said.

The physical abuse petered out, but Jin now feared other people and couldn’t make friends. When she turned 14, she jumped into the kitchen furnace in her home to kill herself. But her family discovered her soon enough to save her life.

That was the first of four suicide attempts.

“I guess the bullies look back on their behavior and think it was a joke,” Jin said. “It isn’t. School violence is a serious crime that can ruin lives.”

Jin eventually married and had a daughter. But she was suffering from depression and bipolar disorder.

One day, Jin realized she was violent to her own daughter, and she knew she needed psychological counseling.

“I saw myself hitting my daughter’s palms with a stick,” Jin recalled. “When I found myself acting the way the bullies did to me, I was disgusted with myself.”

Jin enrolled in night classes in counseling in 2003 and then studied counselling through a cyber university and began working as a therapist.

And when she started counseling people, she felt she was continuing her own treatment.

Then in 2009, her 13-year-old daughter was bullied by five of her classmates.

Jin took the opposite approach of her own mother 20 years earlier. She instructed her daughter to “treasure herself” and assured her “there’s always a family who watches over you.” Jin worked on building up her daughter’s self-esteem and confidence. And then she advised her to secretly record the bullying against her on her cell phone. With that evidence, Jin approached the parents of the bullies. Jin’s daughter’s “outcast” days at school lasted only a month.

“Students, parents and teachers have to realize how serious school violence is,” Jin said. “The reason I suffered years after the bullying ended is because my teachers and mother failed to provide me with any help. Adults are a big part of this problem. They have to stand up against school violence.”

Jin acutely remembers how alone she felt when she was bullied. When the bullying was reported to the school, Jin’s teacher asked her if she wanted the bullies to be punished. The question scared the vulnerable 13-year-old girl, and she said no. Twenty years on, Jin said she still regrets that response. Her bullies should have been punished, she said. Only severe punishment can stop the bullying.

“I know better than anyone how much suffering the middle school student from Daegu went through,” Jin said. “School violence must be eradicated, and adults should be the first to be taught how serious a crime it is. Then, the children can be taught.”

“No parents should think their children are exceptions - of being bullied or being bullies.”