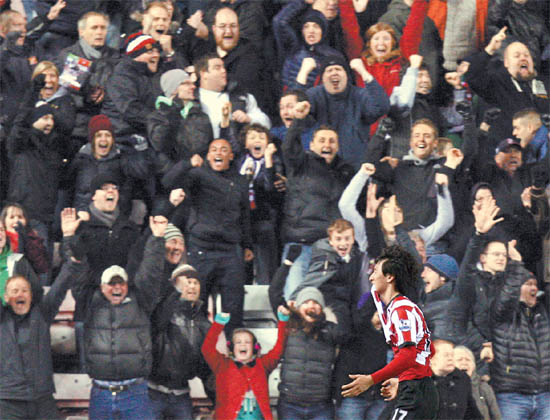 Sunderland’s Korean striker Ji Dong-won celebrates his goal during an English Premier League match against Manchester City at the Stadium of Light in Sunderland, England, on Sunday. Sunderland won 1-0. [AP/YONHAP]

At the Stadium of Light in Sunderland, England, Ji scored the sole goal of the match during second-half injury time, shocking City, which is fighting to stave off Manchester United at the top of the EPL.

“When Ji came on to score that goal, icing on the cake seems to spring to mind!” Sunderland manager Martin O’Neill, who was appointed nearly a month ago after the club sacked Steve Bruce, was quoted as saying by the club’s official Web site. “It was sensational, fantastic, and it was shared by 40,000 of us.”

The 20-year-old Ji came on the pitch for Danish striker Nicklas Bendtner in the 78th minute and finalized the team’s counter attack in the third minute of stoppage time after receiving a pass from Beninese international Stephane Sessegnon.

Though there was controversy as to whether Ji was offsides when he received the pass, he calmly rounded English international goalkeeper Joe Hart and slotted the ball into City’s net with his left foot.

“What came today was very pleasing for me,” Ji said. “All the fans and my teammates were so happy, and that is number one for me.”

The match winner was his second goal of the season since September. Ji, who signed with the Black Cats this summer from Korean side Chunnam Dragons FC, had previously scored against Chelsea FC.

The Korean striker, who has scored eight goals in 15 matches for the national team, said he is proud to have contributed to an important victory for the northeast England club.

Sunderland has won four of five matches under new manager O’Neill and now sits at 13th place in the league table, six points above the relegation zone.

“The win was a big reward for our hard work in not letting Manchester City score,” Ji said. “They are one of the best teams in the league and to score the winning goal in the final minute is special.”

Ji, who was playing his 13th match in the EPL and his first since the match against Blackburn Rovers on Dec. 11, said he wasn’t nervous about encountering the league’s best team.

“I have scored our first goal of 2012, so hopefully things can carry on going well in the coming year,” Ji said.

On Sunday, Sunderland was expected to have a hard time against Manchester City. In fact, the hosts had to swap two midfielders - Craig Gardner and Jack Colback - to fullbacks as the injuries hit their squad.

With defenders Titus Bramble, Phil Bardsley and Kieran Richardson ruled out due to injuries, goalkeeper Simon Mignolet, in for the ill Keiren Westwood, played in a protective face mask after fracturing his nose and eye socket in October.

But even with these setbacks, Sunderland was able to contain City’s attacking threats - Edin Dzeko, Adam Johnson and Samir Nasri - in the first half and succeeded in containing creative strikers Sergio Aguero and David Silva in the second half.

“The team gave absolutely everything today,” O’Neill said. “The effort has been fantastic, but today it was overwhelming.”

O’Neill acknowledged that City is superior team, but praised his club’s concentration and efforts, especially in the second half.

“They camped outside our box for 10-15 minutes, and we couldn’t get the ball,” O’Neill said. “We threw bodies in front of shots, and it was just a great effort all round.”

During the match, City fired 20 shots, 14 more than Sunderland, and was able to strike the woodwork twice from shots by Dzeko and defender Micah Richards.

“We deserved to win this game,” City’s Italian manager Roberto Mancini told Sky Sports. “It’s incredible. .?.?. This is football. I don’t know how many chances we had. A team like us can’t concede a goal on the counterattack at the end.”

The result forced City to stand at 45 points with Manchester United, which suffered a 3-2 defeat against Blackburn Rovers on Saturday. Mancini’s side is now leading United only through goal differential.