Gelb’s pastiche premieres at the Met

Gelb’s pastiche premieres at the Met 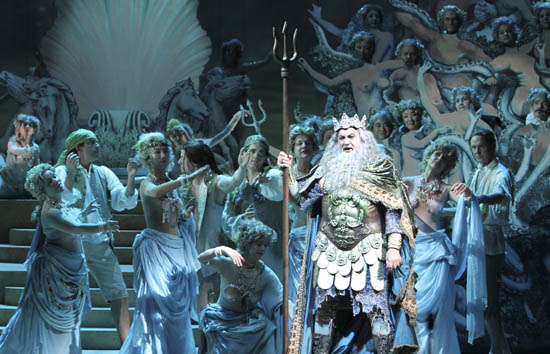 Placido Domingo performs as Neptune during the final dress rehearsal of “The Enchanted Island” at the Metropolitan Opera in New York on Dec. 28. [AP/YONHAP]


Call it a pastiche. Or a Baroque fantasy in two acts. Or the best opera Handel and Vivaldi never wrote.

By any name, “The Enchanted Island,” which had its world premiere at the Metropolitan Opera on New Year’s Eve with an all-star cast, is irresistibly entertaining. It’s a light-hearted romp with enough fizz to send a dozen Champagne corks popping, and its only serious drawback is that at three-and-a-half hours, it serves up a bit too much of a good thing.

The concoction was the brainchild of Peter Gelb, the Met’s general manager, who wanted to expand the company’s Baroque repertory in a way that would create a stir and draw in new audiences. So, he reinvented a 300-year-old gimmick, the “pasticcio,” in which already existing music by several composers was fitted to a new libretto and plot.

Baroque specialist William Christie was engaged to oversee the musical preparation and conduct, and writer and director Jeremy Sams crafted the libretto. It was his clever idea to combine two Shakespeare plots: The quartet of lovers from “A Midsummer Night’s Dream” get shipwrecked on Prospero’s island from “The Tempest,” a major outbreak of mistaken identity ensues and it takes all manner of magic spells - not to mention intervention by the sea god Neptune - to straighten things out again.

To bring their creation to life on stage, the Met wisely hired Phelim McDermott and Julian Crouch to design and direct the production, Kevin Pollard to do the costumes and a company called 59 Productions to provide animation and projections.

Their inspired work on Philip Glass’ “Satyagraha” was on view earlier this season, and they have again done wonders, creating eye-popping magical effects with the humblest of means.

The basic set is a deliberately old-fashioned proscenium frame with Prospero’s book-lined lair on the left, and on the right, the primeval dwelling of Sycorax, the sorceress whose magic he has usurped. (The mother of the wild Caliban, she is mentioned but does not appear in the Shakespeare play.)

At the rear, a curtain rises for the ocean scenes - starting with a rollicking shipwreck in which the four honeymooning lovers sing of “Days of pleasure, nights of love,” (adapted from Handel’s “Semele”) only to see their boat capsize in a sudden storm. When Neptune makes his first appearance near the end of Act 1, he does so seated on a clam-shell throne, with mermaids dangling from ropes behind him.

“The Enchanted Island” will play nine more times through Jan. 30. The matinee on Saturday, Jan. 21, will be broadcast on the radio and also shown in high definition in movie theaters in the United States and around the world.