Most poorly paid workers in OECD

Most poorly paid workers in OECD 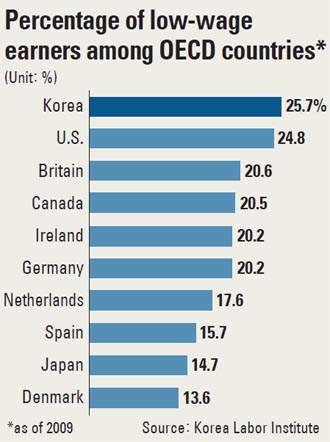 One in four full-time workers in Korea are classified as “low-wage earners,” the highest ratio among member nations of the Organization for Economic Cooperation and Development, a report said yesterday.

The state-run Korea Labor Institute said in a report that the ratio of low-wage earners in the country stood at 25.7 percent as of 2009, obstructing efforts to address income and wealth inequality and improve social integration.

Low-wage earners are full-time employees who earn less than two-thirds of the median wage.

The rate of low-wage earners in the country marks the highest level among those recorded by 34 OECD member countries, the report showed.

The United States closely trailed Korea with 24.8 percent, followed by Britain with 20.6 percent and Canada with 20.5 percent, the report noted. Ireland and Germany also recorded rates above 20 percent.

Belgium, Italy and Norway recorded some of the lowest rates with 4 percent, 8 percent and 8.5 percent, respectively.

Countries with higher levels of GDP and records of steep economic growth tend to create such poorly paying jobs, the report pointed out.

In order to reduce the number of low-paid workers, countries need to lift state-determined minimum salary levels to match two-thirds of the median salary, the standard used to define the low-paid workforce, the report noted.

Since raising their minimum salary levels to match the standard in 1999 and 2000, Britain and France both saw the numbers of low-paid workers lose ground in their countries, it added. “In most countries, low-paying jobs are persistent and recurring issues and that can widen income and wealth inequalities,” an official at the institute said.