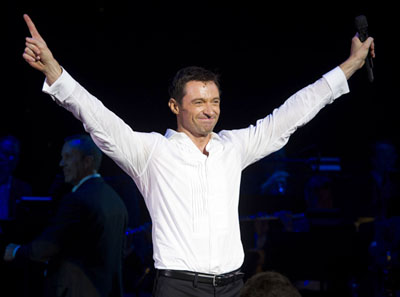 NEW YORK - Hugh Jackman has left Broadway with a lot of broken hearts - and records.

The hunky Australian actor’s one-man Broadway concert show closed on Sunday afternoon at the Broadhurst Theater after having earned $2,057,354 in its final week, the highest weekly gross recorded by the Shubert Organization, which owns the Broadhurst and 16 other Broadway theaters.

Jackman, best known for being the hairy Wolverine in the “X-Men’’ franchise, routinely sold out the 1,176-seat theater and usually posted weekly grosses of $1.5 million, often higher than rival musicals such as “Jersey Boys,’’ “Mama Mia!’’ “How to Succeed in Business,’’ “Anything Goes’’ and “Follies.’’

Only “Wicked’’ and “The Lion King,’’ produced by other organizations, consistently outdid Jackman. But those shows also had much higher overhead costs.

The previous record at the Broadhurst was held by the Al Pacino-led “The Merchant of Venice,’’ which took in $1,175,750 earlier this year. Until now, the Shubert Organization’s one-week biggest haul was “Billy Elliot,’’ which earned $1,663,895 during an eight-show stretch last year.

During the run, Jackman raised a record $1,789,580 for the charity Broadway Cares/Equity Fights AIDS. The run “not only confirms him as one of the most bankable stars in Broadway’s history but also as a fund-raiser,’’ producer Robert Fox said.

Backed by an 18-piece orchestra and six leggy dancers, a charming Jackman belted out about two dozen musical theater songs in “Hugh Jackman, Back on Broadway.’’