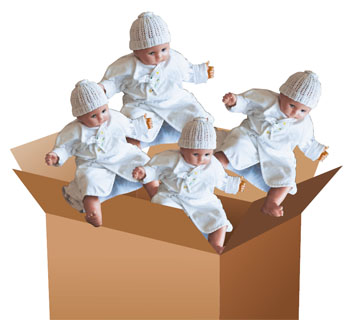 Their first child was born with a deformity. At one point, Lee Jong-rak blamed God. He didn’t want to see his wife faint from seeing their disabled son, so he hid the baby for a month, coming up with all imaginable excuses. But it was beyond their control; Eun-man, a little boy born with cerebral palsy, was part of their family. He would change the lives of his parents forever, necessitating care and assistance 24 hours a day.

As Lee was caring for his son, the ardent Christian encouraged parents around him to not give up on their disabled children. He became a minister 14 years ago - around when Lee received a life-changing request from a grandmother staying beside Eun-man in the hospital. She was caring for her mentally challenged granddaughter who had been abandoned by her parents.

“She came to me and asked me to keep her granddaughter. She told me she could close her eyes in peace if I would accept the child,” recalled Lee as he fed his grown-up son Eun-man using a syringe during a recent interview. “A string was attached to her request, though. It made it hard for me to turn down her offer. She said, ‘I will believe in Jesus if you take the child.’?”

The grandmother passed away a year later.

Word spread of Lee’s benevolent deed, and soon abandoned babies began to appear around his church. Unsure of how to manage the trend, Lee made a “drop box” as a way to protect the newborns from harsh weather and stray cats. If a baby is placed within the box, which is connected to the church, a bell rings to alert those inside.

The drop box was installed in December 2009. Over the past few months, Lee’s drop box has made local and foreign headlines numerous times. The Korea JoongAng Daily also paid a visit to the church about five months ago when the box was in the midst of heated controversy.

The Korea JoongAng Daily recently paid a second visit to the church, but little has changed.

Four more babies came through the drop box, the parents showing little care even on the day of abandonment. Wrapped up in a dirty towel covered in the thick odor of smoke, umbilical cord still attached, a baby girl was crying in the hatch. Another newborn was left in the box without a diaper and his umbilical stump caked with his feces, threatening to elicit a fatal infection.

Pastor Lee still receives calls from parents, mostly mothers across the nation, who want to give up on their children for many reasons. The Gwanak District Office and Lee remain in a tug-of-war. The district office says the drop box should be scrapped. Lee affirms he can’t until the government implements policies addressing the problem and saving the abandoned children. 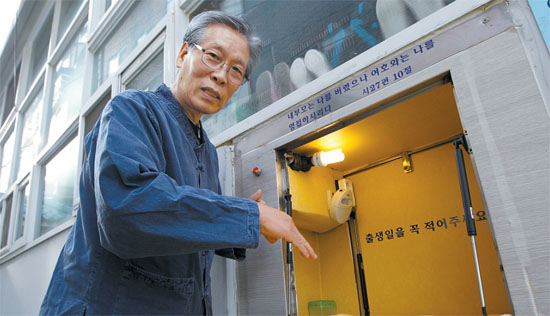 Pastor Lee Jong-rak built a drop box, shown above, attached to his Jesus Love Community Church in order to protect abandoned babies from harsh weather and stray cats. The drop box has attracted worldwide attention from as many as 10 countries, but little has improved for single unwed mothers and their children. A verse from Psalms is engraved on the drop box: “Though my father and mother forsake me, the Lord will receive me.” [JoongAng Ilbo]

In a society in which down-to-earth sex education and premarital sex are still considered taboo, child abandonment, which is illegal in Korea, continuously makes the headlines. According to the Ministry of Health and Welfare, some 8,500 children were abandoned last year alone. Most recently, two women, one in her 30s and another in her 20s, abandoned their newborns last month.

In order to avoid punishment, parents often abandon their babies at public lavatories or in waste bins. A growing number of teen pregnancies is exacerbating this trend.

“About 60 percent of the babies are born from teen mothers,” Lee said. “They don’t know what to do after giving birth to a child. They contact shelters for single mothers but they are stressed out as to whether they should wait at least a month to enter the shelter. They eventually make the extreme choice to abandon their children.”

In addition to teen mothers, those giving birth to disabled babies make up a large proportion of child-abandoning parents. Babies with a variety of disabilities such as Down syndrome, cleft palate, hydrocephalus and achondroplasia have been placed in the drop box thus far. Children born with disabilities are often seen as a disaster for parents, but Lee sees them in a different light.

“Who do you think is the greatest person in the world?” the pastor asked rhetorically during the interview. “Look at people like Hirotada Ototake and Nick Vujicic [born without arms and legs]. They give hope, strength to carry on and heal ordinary people like you and me.

“I came to realize that people with disabilities have a special talent: They heal us with their mere presence.”

Lee has adopted 10 children, most of them with disabilities, and four others are waiting to be legally adopted.

“I could adopt babies who came here through the drop box before April, but not any more,” Lee said. “I don’t understand why [the district office] views [the box] so badly. It was designed to protect babies from external threats. Parents come from as far as Yeosu, Masan, Changwon and Gumi [to drop their babies].”

Before April, Lee legally adopted babies. But the Gwanak District Office changed its policy, and since then abandoned newborns have been picked up and transferred to relevant facilities.

Lee lamented that the babies should have been kept at his church.

“As long as there are no relevant plans by the government, I’ll continue my drop box project.”

Lee wants to see the government change its current policies regarding child abandonment. Under the law, parents who abandon their children face fines or jail terms of up to two years. But it is almost impossible to enforce these punishments because the newborns are abandoned with no birth records or trail to the parents.

Lee also urged that there should be an organization that protects abandoned children in a fashion similar to his drop box. 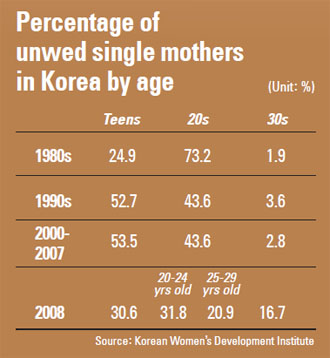 The Gwanak District Office has been portrayed by the media as a heartless organization hell- bent on barring Lee from operating the drop box. But the district office had its own story to tell.

“I know his intentions are good, but Lee’s facility is against the law in many ways,” said Lee Eun-ju, a representative of the district office who is responsible for the welfare of the disabled.

Indeed, the church where Lee, his wife and decades of children live is a cramped, two-story building with many stairs, doorsills and other obstructions. About 20 people reside in the building, yet the church has only four rooms.

“Such a facility should be registered and has to be controlled by the district office in terms of food safety, human rights abuses and so on. If it was registered, the organization could receive incentives from the government.

“In addition to that, if a facility receives a donation, the facility should report its revenues and expenses [to the district office], but the church is off the radar.

“It’s not something you can do merely on good intentions.”

No way out for abandoned children

The drop box has attracted worldwide attention from as many as 10 countries, but laws for unwed mothers and their children have been downgraded.

The government introduced a one-parent family support law in 2007. Despite the passage of an updated version in April, adoption agencies will no longer be able to operate facilities for unwed pregnant mothers because the agencies might encourage adoption.

The updated law will come into effect in 2015, meaning about half of nationwide facilities for unwed mothers and their children should be shut down.

A lack of facilities for unwed mothers could encourage more parents to give up on their children, according to Kwon Hee-jung, an executive director at the Korea Unwed Mothers Support Network.

“The one-parent family support law has been updated a couple of times, but nothing has really improved,” said Kwon. “Teen mothers to mothers under 24 have still been receiving 50,000 won ($43) for child-rearing expenses every month since 2007.

“After all, there should be diverse support plans for unwed mothers if the government really wants to prevent mothers from abandoning their children. For example, the percentage of unwed mothers in their 30s has sharply risen over the past few decades,” said Kwon.

Unwed mothers in their 30s accounted only for 1.9 percent of all one-parent families in the 1980s, but the figure jumped to 16.7 percent in 2008, according to research conducted by the Korean Women’s Development Institute.

Still, the government’s plan is focused on teen mothers. “As long as the teen mothers want, there are many facilities where they could stay for up to six years, but there aren’t similar facilities for unwed mothers in their late 20s and 30s,” Kwon said. “There is a high chance of losing your job if you decide to raise a child as a single unwed mother. In addition to that, your family would turn away from you.