Giants in, Cowboys out as NFL playoffs take shape

Giants in, Cowboys out as NFL playoffs take shape 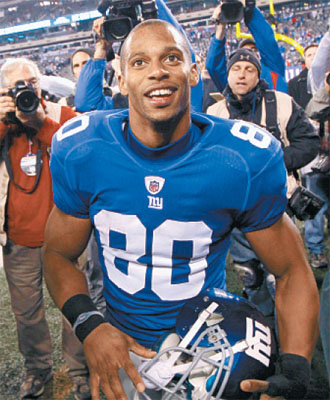 Sparked by Victor Cruz, New York’s newest football star, the Giants won the NFC East title Sunday night by beating the Dallas Cowboys in their showdown in the final game of the regular season.

Cruz sped 76 yards for one touchdown and, when Dallas got within seven points, made a leaping 44-yard catch on third down to set up a clinching field goal in a 31-14 victory. New York (9-7) also sacked Tony Romo six times to sweep the season series with the Cowboys (8-8).

The Giants won three of their last four games after a four-game slide dropped them to 6-6. Cruz was a big factor in each win. He had a 99-yard catch-and-run score last week against the Jets and made six receptions for 178 yards against the porous Dallas defense.

Even without any Tim Tebow heroics, the Denver Broncos won the AFC West.

They did it despite falling 7-3 to the Kansas City Chiefs on Sunday because San Diego knocked off Oakland 38-26. The Broncos and Raiders shared the division lead at 8-8, but Denver won on the tiebreaker with better results in common games.

Baltimore (12-4) took the AFC North and a first-round bye as a No. 2 seed when it outlasted Cincinnati 24-16. Even though the Bengals lost, their 9-7 record earned them a wild card in a head-to-head tiebreaker over Tennessee, the only other team with that record in the AFC. The Bengals beat the Titans 24-17 in November.

Pittsburgh (12-4) is the other wild card, but lost both games to the Ravens this year to finish second in the division. The Steelers, who beat Cleveland 13-9, will be at Denver next Sunday. Cincinnati visits Houston (10-6) on Saturday.

Tebow’s late-game magic helped Denver turn around its season, from 2-5 to the top of a weak division. He struggled mightily as the Broncos lost their last three games, but they are playoff-bound for the first time since 2005.

By winning every game in the second half of the season, the Patriots own home-field advantage in the AFC playoffs. By losing their last three games, the New York Jets won’t be going to a third straight conference title game.

The Patriots (13-3) earned the right to stay at home throughout the AFC playoffs after a 49-21 victory over Buffalo, which led 21-0. It should be comforting to them, except the Patriots have lost their last two home playoff games and their last three postseason games overall.

The Jets (8-8) finished a late-season collapse with a 19-17 loss at Miami to fall out of contention. They dropped their final three games after taking control of the AFC’s final wild-card spot.