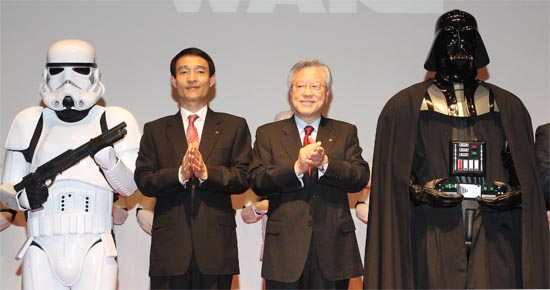 
KT will start its long-term evolution (LTE) mobile communications service this week with two discerning features to help it catch up with its rivals, the nation’s largest fixed-line operator announced yesterday.

The company, also Korea’s second-largest mobile service operator, said it will differentiate itself with its so-called Warp technology to better manage traffic.

This gives the company greater flexibility to use networks in different regions that are seeing less traffic for optimum results, similar to how road transport authorities can open an extra lane to deal with congestion.

KT claims to have got the name Warp from science-fiction films like Star Wars, where it is used to refer to faster-than-light propulsion systems.

The fourth-generation (4G) LTE service promises data-transmission speeds of around five to seven times faster than 3G, and is being adopted by carriers nationwide as the industry grapples with high data demand.

KT said it will establish its new network in the capital this month and expand it to about 84 cities, plus expressways and KTX high-speed trains, by April to cover more than 90 percent of the population. 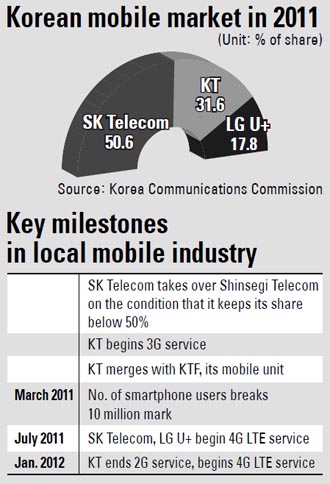 Another strategy is the company’s payment plan. KT is offering various plans, including one that gives its LTE subscribers 3,000 minutes of free talk time, and another that promises improved data usage fees for the first three months.

KT’s 4G commitment comes after months of high drama, as the Seoul High Court ruled on Dec. 26 that the government’s decision to allow it to end its 2G service was valid. This followed some legal wrangling over whether the decision to ax the older network was fair to its remaining subscribers.

KT was working to reduce the number of its 2G users in order to get government approval to shut down this network and use the same 1.8-gigahertz (GHz) bandwidth for its 4G service.

But some 900 subscribers to the older service - which is still hugely popular in other countries but looks set to become quickly outdated here - filed for an injunction in early December in a bid to halt the move. They claimed KT had resorted to unlawful measures to end their subscriptions.

A lower court granted them the injunction but the Seoul High Court on Dec. 26 reversed the ruling.

But while the bickering dragged on, KT’s two chief rivals, SK Telecom and LG U+, were already establishing an early lead in the realm of LTE.

Both launched commercial services in July to much media fanfare, and followed by unveiling a rich lineup of LTE devices from October to lure trend-sensitive early adopters.

Now the question looks to be whether KT can make up for its delay and play catch-up.

As for the devices, the company said it will start selling three LTE-compatible smartphones and one tablet this month, and release five more in the first half of this year. With this, Chairman Lee Suk-chae said KT aims to attract 4 million LTE users by the end of this year.

Some critics have expressed concern that KT’s longheld position as the nation’s No. 2 mobile carrier might be in danger as LG U+ has made impressive growth with LTE. Some even question if the way the three players carve up the market may be totally reconfigured. At present, SK Telecom owns roughly half, while KT has 30 percent and LG U+ 20 percent.

Other analysts predict that KT’s marketing and promotional skills mean it will just be a matter of time before KT claims the runner-up spot in LTE.