Ultrabooks seen as just the tonic for ailing PC market

Ultrabooks seen as just the tonic for ailing PC market 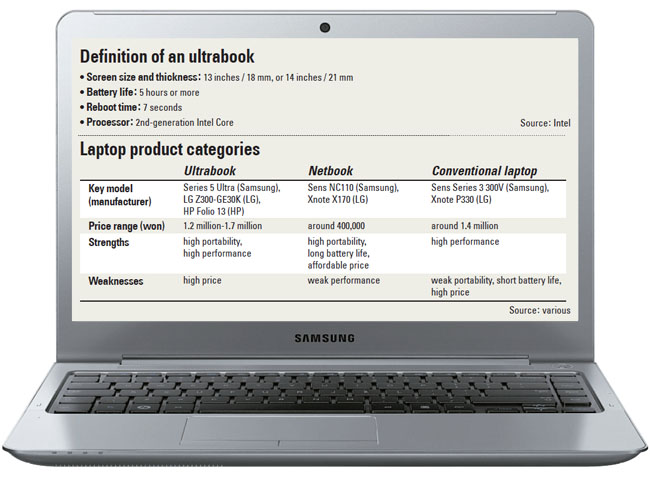 
First came the laptop, then the netbook, followed by the tablet PC. Now there is a new kid on the block in the world of digitally convergent mobile gadgets: the ultrabook.

Last year was an exceptionally difficult one for PC makers, as tablets and smartphones caused people to shun conventional laptops and netbooks. But PC makers are hoping that the ultrabook will swoop in like a relief pitcher and save the day by revitalizing the stagnant market.

Ultrabooks are next-generation laptops with superior performance levels and dimensions. They are thinner, lighter - making them more portable - and have a battery life about 1.5 times longer than most laptops.

U.S.-based chipmaker Intel created the new hardware category, just as it created the netbook as a generic distinction several years ago. In fact, the name ultrabook is an Intel trademark, and the company is hoping PC makers will churn these out using its chips to put up a strong fight against tablet PCs and the MacBook Air, which Apple pumped out before the ultrabook concept was born.

According to the proportions mapped out in Intel’s definition, a device ranks as an ultrabook if it has a screen size of 13 inches and is slimmer than 18 millimeters (0.71 inches), or a screen size of around 14 inches and a thickness of less than 21 millimeters. It should also have a battery life of more than five hours, a reboot time of seven seconds from a maximum power-saving mode and be able to run on a second-generation Intel Core processor.

Korean PC makers like LG and Samsung, as well as their foreign counterparts Intel, HP and Toshiba, have been rolling out one ultrabook after another in recent months.

In light of the speed with which the new trend is being adopted, some market observers predict that by next year, four out of every 10 laptops sold will be an ultrabook.

The biggest charm of the model is its fast booting speed, as it only takes 9.9 seconds. LG officials say this is the fastest among Intel-approved ultrabooks available in the market, and less than one-third the time it takes conventional laptops to boot up.

Lee Jeong-jun, the head of the company’s IT business division within its home entertainment department, said the model is “an innovative product with a world-class level of speed and thinness.” 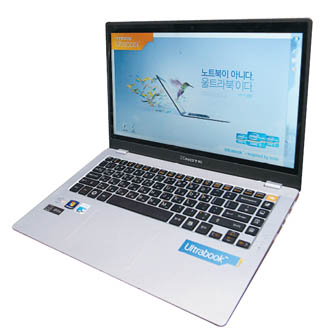 LG officials also emphasized that the company is targeting the premium ultrabook segment and the device’s high standards in terms of function, design and convenience will appeal to those who seek high specifications.

Samsung also unveiled its rendition of an ultrabook earlier this month, the Series 5 Ultra. This differentiates itself with its large storage space, an appeal to bloggers and other users with huge amounts of data to save in the form of files, pictures and videos.

It is also the first ultrabook to come armed with an optical disc drive. Buyers can choose between solid-state drives (SSD) that use flash memory chips and a hard disk drive (HDD) that offers up to 1 terabyte of storage space.

Ultrabooks usually rely on SSDs despite the higher costs involved because they are smaller and faster. This distinction becomes clear when the two Samsung versions are compared, with the HDD ultrabook slightly heavier and showing a slower booting speed.

“Samsung has years of experience in making ultrathin and lightweight laptops. That is why we were able to release the Series 5 Ultra, which far excels its rivals in terms of performance, storage and graphics,” Samsung said in a press release.

Foreign PC makers are also eyeing a slice of the Korean market in this new niche as they compete in terms of weight, thinness and longevity of battery life.

While some are strong in certain areas and weak in others, it is hard to find an all-rounder that can dominate all three. The HP Folio 13, for example, is thicker and heavier than most of its rivals at 18 millimeters and 1.49 kilograms, but its battery life is hard to match, at 9.5 hours.

In contrast, Asus’ Zenbook is one of the thinnest ultrabooks in the market, measuring just 3 millimeters at its narrowest part after tapering down from 9 millimeters. It also comes with a coveted sound system made by Bang & Olufsen, the Danish maker of top-end audio systems.

Toshiba’s Portese Z830 is the lightest 13-inch ultrabook in the market at just 1.09 kilograms, making it nearly half as light as conventional laptops.

“Toshiba has been making laptops for the past 27 years, and the Portese Z930 is the epitome of its technological prowess,” Kim Kyu-jin, a director at Toshiba Korea, was quoted as saying by Korean media.

Intel has urged PC makers to set their ultrabook prices below $1,000.

“We have already launched a low-cost version that goes for around $1,000 in the U.S.,” a Toshiba official explained. “We plan to roll out products at staggered prices in the future.”

In Korea, ultrabooks start from 1.2 million won and go as high as 2.6 million won, making even the cheapest version three times as expensive as an iPad.

HP’s Folio comes in at the affordable end, while Samsung’s and Toshiba’s ultrabooks are midrange and LG’s Xnote is in the upper bracket.

But criticisms have surfaced in recent years that PC makers have been focusing too much on premium quality at the expense of price competitiveness.

This negative market sentiment caused a rethink at LG, which originally intended to release its Xnote at around 1.7 million won before lowering the retail price to 1.59 million won.

Now some observers are predicting that the era of the ultrabook will see demand and competition for the new gadgets rise to such an extent that prices may drop below 1 million won around midyear.

“The ultrabook is a completely new product that will deliver to PC users an amazing experience,” an ebullient Lee Hee-sung, the country manager of Intel Korea, told reporters.

But not everyone is so upbeat about the prospects of the overall PC market.

Research groups IDC and Gartner recently cut their growth forecasts for the coming years as consumers continue to tighten their purse strings amid a feared global economic contraction in 2012.

They also cited the oversaturation of mature markets and budget cannibalization from competing devices like media tablets.

But Jay Chou, IDC’s senior research analyst, said PC makers only have themselves to blame.

“Consumer PCs have also suffered due to a relative lack of compelling offerings. As excitement about mini notebooks has faded, the PC industry is struggling to come up with compelling features to keep buyers interested.”