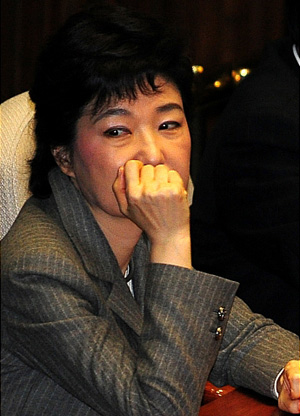 The National Assembly passed a bill raising the income tax on high incomes, accepting a proposal by ruling party reformists despite the objection of their interim leader Park Geun-hye.

Dubbed the “Buffett tax” after Warren Buffett, the American investor who has proposed higher taxes in the U.S. for the rich, the bill was passed on Saturday night with a vote of 157 to 82.

The law creates a new tax bracket for high-income earners, 38 percent on an individual who earns more than 300 million won ($258,843) in taxable income in a year. Previously, there were four income brackets, and the highest was for individuals earning more than 88 million won annually, who had to pay 35 percent income tax.

The government approved the bill at a parliamentary meeting yesterday led by Prime Minister Kim Hwang-sik.

Since its defeat in the Oct. 26 Seoul mayoral by-election, reformists in the GNP have been trying to alter the party’s image of being a party for the rich. But Park, the party’s interim leader and presidential election frontrunner, opposed the new tax.

Initially, the GNP followed Park’s lead in keeping the tax rates unchanged. At a meeting of the National Assembly’s Strategy and Finance Committee on Wednesday, the DUP proposed to raise taxes to 40 percent on people who earn more than 150 million won a year, which the ruling party turned down.

But 30 GNP reformists didn’t give up. They joined with 22 DUP members who recently left the ruling party and proposed a revised tax bill that levied a 38 percent income tax on annual incomes of more than 200 million won. A group of other GNP lawmakers joined the move, expressing their approval of the new tax on their Twitter accounts.

On the last day of 2011, ruling party leaders abruptly convened a closed-door meeting before the plenary session. Eventually, they agreed on a 38 percent tax on incomes above 300 million won and the National Assembly passed the bill.

According to the GNP’s calculation, the new tax rate will raise an additional 77 billion won in revenue a year. The government hasn’t released its calculation.

But some opposition and pro-Park GNP lawmakers still questioned the efficacy of the new tax.

“The percentage of people whose incomes exceed 300 million won is only 0.17 percent of the population,” said Lee Yong-sup, a DUP lawmaker, at a debate after the session, “and that of salaried employees is even smaller - 0.08 percent of all employees.”

Meanwhile, just 20 minutes prior to the start of 2012, the Grand National Party railroaded through the 2012 government budget of 325.4 trillion won ($282.6 billion), with 171 votes in favor out of 178 lawmakers who cast votes. The main opposition Democratic Unity Party members walked out of the chamber to protest the GNP’s refusal to launch a parliamentary probe into the sale of Korea Exchange Bank by U.S. private investment fund Lone Star.