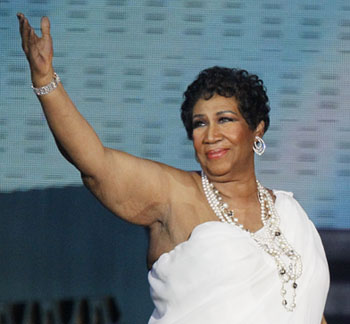 LOS ANGELES - “Queen of Soul” singer Aretha Franklin has become the latest celebrity to announce an engagement over the holidays, joining a list including “Aerosmith” frontman Steven Tyler and basketball superstar LeBron James.

Franklin, 69, and her friend William “Willie” Wilkerson hope to marry later this year on a sandy Miami beach with a private party to celebrate afterward aboard a yacht, a spokeswoman for Franklin confirmed on Monday.

“We’re looking at June or July for our date, and no I’m not pregnant, LOL!,” Franklin said in a statement.

Franklin was sidelined by a mysterious ailment at about this time last year, but overcame her health scare in January and shed 85 pounds on the road to better health.

The legendary singer of 1960s hits like “Chain of Fools” and “Baby I Love You” sang at her own 69th birthday party in March.

Tyler, 63, rocked longtime girlfriend Erin Brady, 38, with a proposal, too, his representative confirmed to celebrity media, but no details were given.