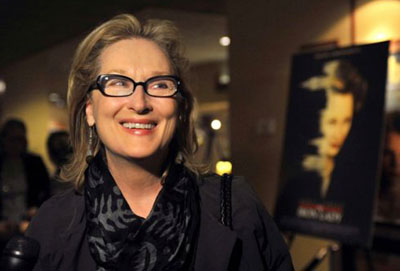 Streep, 62, whose latest film sees her portraying Britain’s former Prime Minister Margaret Thatcher in the biopic “The Iron Lady”, will receive the award during the Feb. 9 to 19 festival, organizers said.

“Meryl Streep is a brilliant, versatile performer who moves with ease between dramatic and comedic roles,” the festival’s director Dieter Kosslick said in a written statement.

The award will be presented on Feb. 14 at the screening of “The Iron Lady”, while audiences at the Berlinale, as the festival is known, will also be able to see five of Streep’s other films.

In 2003, Streep, who has appeared in more than 40 movies and has twice won an Oscar, shared the Berlinale’s Silver Bear award for best actresses with Julianne Moore and Nicole Kidman for their performances in “The Hours”.