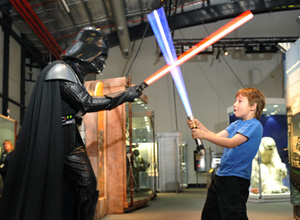 LONDON - Bob Anderson, Olympic swordsman and the man inside Darth Vader’s helmet during many iconic lightsaber battles in the Star Wars films, has died aged 89, the British Academy of Fencing said.

Anderson, who represented Britain in fencing at the 1952 Games, “passed away peacefully” on Sunday morning in an English hospital, the fencing organization announced.

“He was truly one of our greatest fencing masters and a world-class film fight director and choreographer, and both the fencing community and film world will miss him,” said Philip Bruce, president of the academy.

Although arch-villain Vader was played by David Prowse and voiced by James Earl, Luke Skywalker actor Mark Hamill later revealed that “Bob Anderson was the man who actually did Vader’s fighting.”

“It was always supposed to be a secret, but I finally told [director] George [Lucas] I didn’t think it was fair any more,” Hamill told Starlog magazine in 1983.

“Bob worked so bloody hard that he deserves some recognition.”