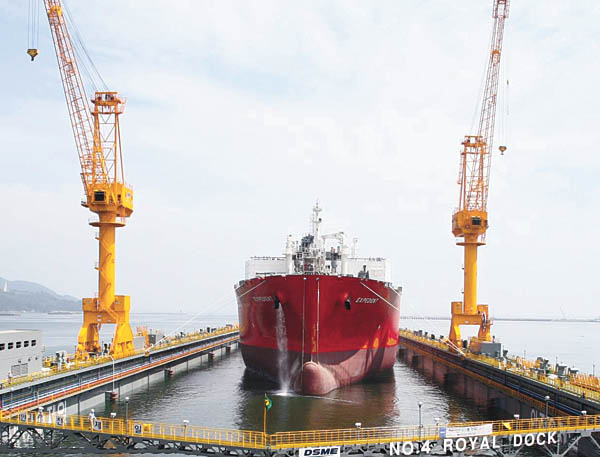 Unlike other industries that have high hopes of good fortune in 2012, potential rain clouds loom on the horizon for small and medium-sized shipbuilders as the global market is expected to shrink this year.

“We only have a slim chance of making it through the year, but we may survive even though the situation is likely to get worse from here on in,” said one employee at the dockyard of a small ship-making company in Tongyeong, South Gyeongsang.

“What we are seeing here is a repetition of the previous financial crisis [in 2008],” he said.

While Korea has ranked as the world’s No. 1 shipbuilder since 2001, Europe’s prolonged financial crisis has had a far-reaching impact on the local industry, and the negative effects of this look set to persist this year, darkening its outlook.

Korean shipbuilders’ clients in Europe have requested that deliveries be delayed or contracts canceled as they struggle with liquidity problems. European banks have become reluctant to lend money for shipping firms due to the stagnant market. And the repercussions of this are being felt in Korea as more than 80 percent of local companies’ clients are based in the debt-bound continent.

Global shipbuilding orders stood at 23.5 million compensated gross tons (CGT) in the third quarter of last year, down 22.3 percent from the corresponding period in 2010, according to data compiled by Clarkson, a global shipping market researcher.

But the situation was markedly better in Korea, whose shipbuilders won a total of 12 million CGT as of the third quarter, showing a rise of 29 percent from 2010.

Although key players are expecting to see order backlogs wind down this year as new orders thin out, researchers and financial analysts predict the big three will continue to prosper by focusing on these two niches. 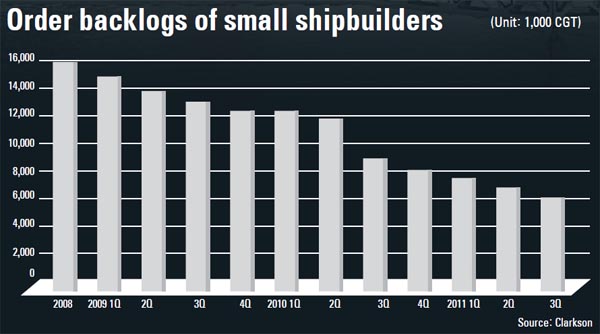 The poor get poorer

However, there is a stark difference between the big three and the rest of the industry. As such, the phenomenon of the rich getting richer while the poor get poorer looks set to continue.

According to Korea Exim Bank, 15 or 16 small shipbuilding companies are operating in Korea, but most if not all are suffering from mounting financial difficulties. The number was significantly higher several years ago, but about a dozen have already vanished due to the 2008 global financial crisis and other factors.

Small and medium-size shipbuilders, whose key business is building traditional vessels like oil tankers and bulk carriers, have seen orders continuously shrink. According to Clarkson, global orders for bulkers plummeted 62.5 percent in the third quarter of 2011 on-year, while orders for tankers slid 27.6 percent.

Over the same period, total order backlogs of small shipbuilders declined by 10.5 percent to stand at 6.3 million CGT. Considering their respective capabilities, the remaining backlogs only provide them with enough work to keep busy for the next 17 months, the institute said.

As ship orders dwindle, prices have also been slashed by about 20 percent from 2007, when the market was experiencing a boom. Clarkson’s price index shows how average prices for new ships fell from a reading of 185 in 2009 to 142 last year. 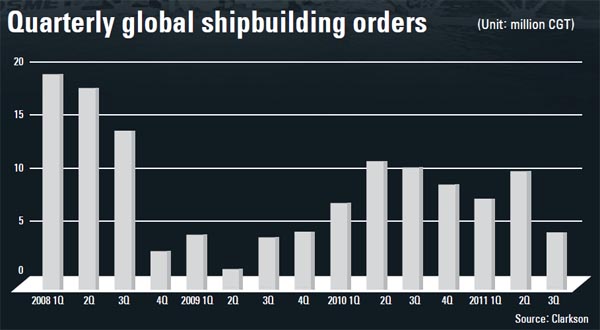 Times look especially tough for struggling shipbuilders that are finding a lack of sympathy from their creditors, with Sungdong Shipbuilding & Marine Engineering being a case in point.

The world’s eighth-largest shipbuilder in terms of order backlog is being refused funds by Korea’s financial sector as Kookmin Bank, one of its creditors, decided to boycott the company’s debt restructuring program.

Woori Bank, another creditor of Sungdong, said it will closely monitor the company’s progress and overall market conditions, and make an assessment every three months as a precondition for its continued financial support.

“Since 2010, the financial industry began shying away from providing refund guarantees for small shipbuilders,” said Yang Jong-seo, a researcher at the Exim Bank Economic Research Institute. “Some commercial banks are even refusing to provide this for big players.”

A refund guarantee safeguards shippers from the risk of not receiving their vessels due to problems on the supply side. It achieves this by allowing them to request their money be repaid in the event that the ship cannot be delivered.

In the last two or three years, many commercial banks stopped providing this guarantee as refund claims snowballed in tandem with the ailing global shipping market, Yang said.

This puts small shipbuilders under greater pressure as banks can effectively kill once agreed upon orders by refusing to issue the guarantee.

“Even state-run banks like Exim are not allowed to provide the RG due to tightened financial regulations, including the implementation of Basel III,” said Yang, referring to a global regulatory standard for banks’ capital ratios.

He said small shipbuilders have no future. “It’s like a natural disaster. The bulk carrier market looks like it has zero chance of recovering, and the tanker market only has a slim chance,” he said. 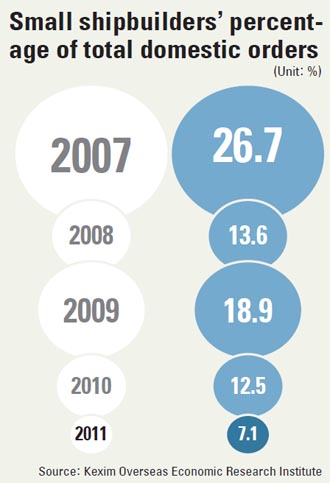 Yang urged the government to come up with measures to save small ship makers. “Letting them shut down would be a huge loss to the country,” he said. “They are much more capable than their Chinese counterparts.”

If the government provided assistance, they would find a way of making a significant contribution to the domestic industry in the future, he added.

The small shipbuilders are located mainly in Tongyeong, South Gyeongsang and Mokpo, South Jeolla, propping up the regional economies there. The shipbuilders employ a number of residents and outsource much work to smaller businesses in the regions.

“Shipbuilders in the South Jeolla area account for a significant portion of the regional economy, including employment,” Yang said, adding that a solution may lie in chasing mergers and acquisitions.

“Most of the small shipbuilders are waiting for new owners, but big shipbuilders feel they cannot afford to go down this route because the overall industrial outlook is not that good.”

Even the bigger companies are striving to formulate strategies to survive the next two years, he said.