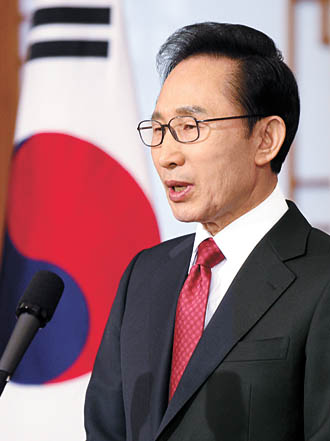 In a message to the new leadership of North Korea, President Lee Myung-bak said yesterday that the South will keep open the window of opportunity for better relations, stressing that its highest priority is peace and stability on the Korean Peninsula.

Lee delivered a 20-minute-long New Year’s address yesterday morning from the Blue House, which was broadcast live nationwide. The president offered a brief, conciliatory message to the North, while discussing other goals of his administration for its final year. He said bringing economic stability to working-class families was more important than economic growth.

Lee also apologized for a series of corruption scandals and other irregularities involving his family and aides through last year.

The president said the key task of his administration this year was managing the uncertainties caused by global economic turbulence and rapid political changes around the world.

“All major countries including the United States will elect new leaders,” he said. “A significant change is foreseen in the Korean Peninsula and Northeast Asia after North Korean leader Kim Jong-il’s death. I will do my best to maintain peace and stability on the Peninsula. I will devote all my energy to creating jobs and stabilizing prices.”

Calling peace and stability the most important goal of the two Koreas, Lee said, “We have left the window of opportunity open” and urged North Korea to show a “sincere” attitude to opening a new era of cooperation.

Lee said he wants to see a turning point this year in the long-stalled negotiations to end Pyongyang’s nuclear arms programs. He said the six-party talks will be able to resume as soon as Pyongyang suspends nuclear activities. “We are ready to provide resources necessary to resolve the North’s security concerns and revive its economy through six-party talks,” he said.

Lee warned, however, that the South will “sternly counter” any armed provocations by the North. In his address, however, Lee did not specifically mention the two deadly military attacks on the South by the North in 2010. Tensions between the two Koreas escalated dramatically after the sinking of the South Korean warship Cheonan, which the North denies, and the North’s shelling of Yeonpyeong Island.

Not citing the two attacks appeared to show the Lee administration’s hope to have some kind of breakthrough in inter-Korean relations following the death of Kim Jong-il. Blue House officials have said in the past weeks that they want to use the change in the North Korean leadership as an opportunity to “reset” inter-Korean relations, stressing that there is no need to unnecessarily provoke the North at this sensitive time.

“It does not mean that we have forgiven the North for the two attacks,” a senior Blue House official said. “There is no need to overly interpret the omission of the two incidents. It is just that we decided not to specifically mention them this time.”

Stressing that peace, security and unification are tasks the two Koreas must achieve together, Lee said the neighbors are expected to cooperate. Strategic communication and cooperation will be reinforced with the United States, China, Japan and Russia as well as Europe and Southeast Asia, Lee said.

While no new proposition was presented to the North, a Blue House official said yesterday that Seoul’s determination to redefine inter-Korean relations is reflected in the decision to begin the New Year’s address with the message to the North rather than burying at the end. “In the past, we have discussed other issues first, but this year, we placed it at the beginning,” he said. “This is another symbolic gesture.”

Other Blue House sources said presidential secretaries and Minister of Unification Yu Woo-ik were present when Lee reviewed the message on Sunday.

“The key is that we have left the window of opportunity wide open so that the North can make a choice,” another senior presidential aide said yesterday. “We decided to hold out our hand.”

He also said the message was that the North will get what it wants if it gives up its nuclear aspirations.

The official said it would be wishful thinking to expect drastic changes in the North after Kim’s death. The North has a desperate need to unite its people by standing up to an outside enemy, he said. “Although we have extended our hand, it is up to the North to grasp it, reject it or bite it,” he said.

Lee devoted a significant part of the address to how the economy will weather global economic turbulence and declared that this year’s goal for the government will be maintaining stability for working-class households. Lee promised to keep inflation low. “Growth is important,” Lee said, “but I will be more focused on inflation.”

Lee also promised to supply 10,000 housing units for university students and to spend more than 10 trillion won ($8.63 billion) to create jobs. Starting this year, 20 percent of the new recruits of state-run offices will be high school graduates in an effort to alter Korean companies’ tradition of favoring university graduates.

Measures to resolve the plight of “nonregular” or nonsalaried workers were also promised. Lee promised the government will pay insurance for 2.12 million low-wage workers.

The government will also pay for child care and education expenses for all households with five-year-old children this year, Lee said, and next year, the program will be expanded to three- and four-year-olds. Parents with infants younger than two will receive child care assistance starting this year, he added.

Conspicuously missing was a political message. Also missing was the customary presentation of his achievements. The president only briefly mentioned the country reaching the group of countries with trade exceeding $1 trillion. In the past, he made long presentations of his government’s achievements.

Lee apologized for his family and aides being involved in a series of corruption scandals and other irregularities. While he did not mention specific cases, the president said, “I must apologize to the people as I looked back last year,” Lee said. “I will look back on myself and my surroundings and correct the wrongs and more sternly manage them.”