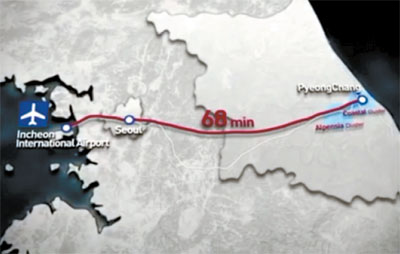 The rail plan presented by the Pyeongchang committee during the Winter Games bid in South Africa in 2010.

The government decided not to build a high-speed rail link that would cut travel time to 68 minutes from Incheon International Airport to Pyeongchang, Gangwon, where the Winter Olympic Games will be held in 2018.

The Ministry of Land, Transport and Maritime Affairs concluded it would cost 10 trillion won ($8.7 billion) to construct but there wouldn’t be enough demand after the Olympics were over.

The country’s Pyeongchang 2018 Winter Olympic & Paralympic Games Bid Committee said in the presentation it made last year in Durban, South Africa, that the ride from the airport to Pyeongchang would take only 68 minutes. The ministry originally considered building the high-speed rail link to support the bid for the Winter Olympics.

“If we are going to fulfill our promise [of a 68-minute train ride], we need to build a railway that can operate at 250 kilometers [155 miles] per hour,” a high-ranking official told the JoongAng Ilbo on the condition of anonymity. “We concluded that it is not feasible in terms of costs and benefits.

“Instead, we are considering using existing railways, including the airport railroad and a railway to be built between Wonju and Gangneung,” he said, referring to two cities in Gangwon.

The ministry said if high-speed trains are run on existing tracks, it will take 93 to 107 minutes to get from Incheon to Pyeongchang. The ministry said it is also reviewing connecting high-speed rail links to be built in the Seoul metropolitan area with the Wonju-Gangneung railway as an option.

The Olympic bid committee needs to revise its transportation pledges for the Winter Games with the International Olympic Committee.

After a JoongAng Ilbo report yesterday morning that the ministry had decided not to build the bullet train line from Incheon to Pyeongchang, the transport ministry said in a press release that it never considered building it.

“It is not true that the government decided not to build a high-speed railway that would take 68 minutes from Incheon International Airport to Pyeongchang because the plan never existed,” the ministry stated.

“The Olympic bid committee said in its bid that it would build a railway between Wonju and Gangneung and connect it to Incheon International Airport,” the ministry said.

The government is now building a railway between Wonju and Gangneung that can accommodate a KTX train that can run 250 kilometers per hour, but it was planned before Korea won the bid to host the Winter Olympic Games.

In a phone interview, Lim Jong-il, a deputy director at the ministry, said the bid committee’s 68-minute voyage pledge was just a rough estimation. “I don’t know why the media focuses so much on time,” Lim said.

Lim said that even when Italy bid for the Winter Olympic Games in Torino, its bid committee originally suggested a one-hour travel time for visitors from Sestriere, but it actually took three hours when the Olympics were held in 2006.